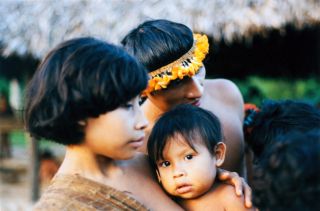 A deadline to remove illegal loggers and settlers from the lands of one of the most threatened tribes on Earth appears poised to pass without action in Brazil.

The Awá, a tribe of about 450, have won multiple legal battles granting them the rights to their territory, which are also guaranteed in the Brazilian constitution. But enforcement of those rights has been lacking, with reports of illegal logging camps operating only 3 miles (5 kilometers) from one Awá settlement.

"It's a complete joke, really," said Sarah Shenker, a Brazilian campaigner for Survival International, a group that advocates for the rights of indigenous people.

A judge, in a declaration published in March 2012, ordered the eviction of illegal loggers, settlers and ranchers from Awá land within a year. Even with the March 31 deadline approaching, no one has been removed.

The Awá are nomadic hunter-gatherers and one of many indigenous groups in Brazil. Survival International has dubbed them "the most threatened tribe in the world," because their land is being rapidly deforested. One territory, the Awá Indigenous Territory, has been stripped of 30 percent of its tree cover, Shenker told LiveScience. The territory's total area is about 463 square miles (120,000 hectares). [The Awá Album: Faces of a Threatened Tribe]

"Last time I was with the Awá, I was going to their community and was in a car with people from the indigenous affairs department, FUNAI, and we saw an illegal logging truck coming out of the territory loaded with wood," Shenker said. "But there was nothing FUNAI could do."

The illegal logging occurs with no oversight, Shenker said, and thus no regulations requiring sustainable practices.

The Awá also share several other territories with other indigenous tribes. Whereas many Awá are in contact with non-indigenous people and the Brazilian authorities, an estimated 100 or so individuals are uncontacted, meaning they don't interact with outsiders. Uncontacted Awá are at particular risk from illegal settlers, Shenker said.

"They don't have immunity to common diseases like a cold or a flu, which could kill them," she said.

FUNAI recently announced that it would launch three expeditions to areas where uncontacted Awá roam to look for signs of the group's safety. The agency has not yet issued reports on those efforts.

In 2011, a Brazilian judge ruled that illegal settlers had to leave Awá lands. The order, published in March 2012, gave Brazil's indigenous affairs department (FUNAI), a year to evict the invaders.

So far, FUNAI has built one base camp on the edge of Awá territory from which to launch operations, Shenker said. But the agency says it needs two more base camps — not to mention manpower. FUNAI relies on local police and cooperation from Brazil's environmental ministry to make evictions happen. That cooperation has yet to be seen, Shenker said.

"The Awá are just waiting and hearing the chainsaws on the land day and night, and the government hasn't gotten its act together yet," she said. [The Awá Speak: Interviews with the Tribe]

If FUNAI fails to meet the March 31 deadline, which now seems certain, the agency is theoretically required to pay a daily fine until the order is met. But in practice, these fines are almost never paid, Shenker said.

Survival International plans to put more pressure on the Brazilian government to enforce the evictions through public letter-writing campaigns to the Ministry of Justice. The group has also launched an awareness-raising effort via their website.

"We're really at a crucial turning point, because if nothing is done, the Awá are really running out of time," Shenker said.