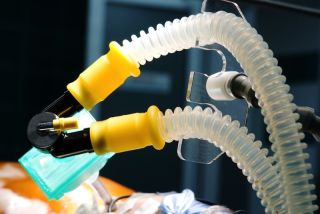 The tubes of a mechanical ventilator used during surgery.
(Image: © beerkoff Shutterstock)

Editor's Note: In this weekly series, LiveScience explores how technology drives scientific exploration and discovery. Since this story was first published on Jan. 7, the McMath's family lawyer has told reporters that the medical facility where she is held has inserted a feeding tube and a tracheostomy tube so that she can receive ventilation through an opening in her throat rather than by mouth.

Two tragic tales — one in California and another in Texas — highlight a form of death made possible only by technology.

In Oakland, Calif., 13-year-old Jahi McMath was declared brain-dead Dec. 12 after complications from a tonsillectomy. Her family believes she is not dead and, after a legal battle, has found an undisclosed facility where she can remain on a ventilator.

In Fort Worth, Texas, Marlise Munoz remains on a ventilator after being declared brain-dead on Nov. 26. Munoz was found without a pulse and not breathing by her husband, and although doctors were able to shock her heart back into rhythm, she was declared brain-dead because of oxygen deprivation to the brain. Munoz was 14 weeks pregnant when she collapsed, and Texas state law prevents life-sustaining treatment from being withdrawn from a pregnant woman, though Munoz's family says she would not have wanted to be kept alive by machines. The state of Munoz's fetus is still unknown.

Brain death occurs when the entire brain is damaged to the extent that there is no remaining brain activity — no reflexes, no electrical activity, no blood flow. It is irreversible, and when doctors determine that a patient is medically brain-dead, he or she is also declared dead for legal purposes. [Inside the Brain: A Photo Journey Through Time]

But brain death doesn't look like death, as patients are on ventilators don't look dead. They are warm; their hearts beat. They appear to be sleeping. The illusion of life can lead to confusion over what brain death is and, as is the case with Jahi's family, the hope that the patient may come back to life.

"Before we had the ability to keep people alive when they could not breathe on their own, we didn't have these issues," said Jeffrey Kahn, a professor of bioethics at the Johns Hopkins Berman Institute of Bioethics in Baltimore. "They were effectively created by the technology."

The technology supporting the bodies of Jahi and Munoz was not created to hold the dead in stasis. Instead, it was meant to save lives — and frequently does.

More common were negative-pressure ventilators, which were huge tanklike devices better known as "iron lungs." These devices, invented in the late 1800s, were widely used through the 1950s. Patients were put inside the airtight tanks while motors pumped air in and out of the tanks. The resulting pressure change pulled and pushed the patients' chests, which sucked air into the lungs and then expelled it out. Iron lungs were most famously used for victims of poliomyelitis (polio). Some polio infections destroy the nerves that control the breathing muscles so that patients cannot take in air on their own. [7 Devastating Infectious Diseases]

The first positive-pressure ventilators widely used in intensive care units (ICUs) during the 1940s and 1950s were relatively simple. Doctors and nurses could control the amount of air injected into the lungs and not much else.

Over time, however, ventilators became more sophisticated. The second generation, introduced in the 1960s and 1970s, included monitors and basic alarms in case a patient's condition changed. The newer ventilators allowed for a patient to breathe spontaneously, if they could manage it, meaning the machine was in more of a supportive role rather than doing all of the breathing itself.

The 1980s saw a huge leap in ventilator technology with the introduction of microprocessors. These ventilators were more responsive to patients' own breathing patterns and monitored themselves and the patient. Air pressure and volume were more adaptable than ever.

Today, the trend toward responsiveness continues. Modern ventilators adjust automatically to a patient's air needs. They can even test a patient's breathing on their own: Many can be programmed to run automatic "spontaneous breathing trials," in which they pull back support briefly to see if patients' bodies start to breathe on their own.

In the future, ventilators will likely be integrated with other hospital equipment and will even be able to deliver data directly to a patient's electronic chart, according to the journal Respiratory Care. Like any other gadgets, ventilators are turning into "smart" tech.

The ethics of ventilation

The advances in ventilation are a boon to patients recovering from serious illness or surgery who need help breathing while their bodies heal. But high-quality ventilators also created a new type of death.

"It was about 25 years ago, 30 years ago that we recognized an alternate way to die," said Dr. Diana Greene-Chandos, an assistant professor of neurological surgery and neurology at Ohio State University Wexner Medical Center. Death is no longer defined by just the heart stopping; irreversible cessation of brain activity also means the end, even if machines keep the body functioning.

For legal purposes, brain death and cardiac death are the same thing, Kahn told LiveScience. [The Strange Science of Death]

"The public policy in all 50 states in the United States has determined that death by brain criteria equals death," Kahn said. That means that as soon as brain death is determined, a death certificate is issued. The only exception is in New Jersey, which allows an exception for Orthodox Jews, who believe death only comes when the heart stops. In those cases, Kahn said, doctors would delay issuing a death certificate.

Nonetheless, brain death is irreversible — and very clear, Greene-Chandos told LiveScience. Neurologists conduct many tests to ensure that the patient has no reflexes. Doctors can do an ultrasound or angiogram to look for blood flow in the brain, or inject traceable compounds into the blood to see if circulation is reaching the brain. They may also use an electroencephalogram (EEG) to search for any electrical activity in the brain.

They also conduct an apnea test, in which the patient is removed from the ventilator for eight to 10 minutes. A brain-dead patient will not breathe on his or her own.

"Many times, if there were any skeptics in the family, that [test] drives it home for them," Greene-Chandos said.

To keep Jahi's body functioning, doctors will not only have to keep her on a ventilator, but will also have to provide nutrition via a feeding tube to her stomach or small intestine, Greene-Chandos said. Intravenous fluids and medications will be needed to maintain her hydration, salt levels and blood pressure. She'll also need to be turned frequently to avoid pressure sores.

Doctors do not know how long Jahi's heart will keep beating. An infected pressure sore or other microbial attack could shut down her cardiovascular system even if she remains on ventilator support. The longest a brain-dead person's body has been supported on mechanical ventilation is 26 days, Greene-Chandos said, but that report came from the early days of the technology.

"With our technology and the supportive means that we have, we could probably extend that," she said. "But as the body lays there and doesn't move and requires full support, the risk of infections and bedsores continues to go up."