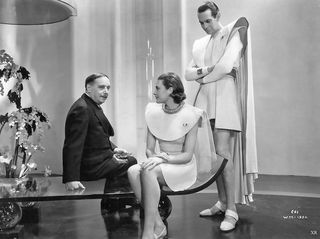 HG Wells (left) with actors on the set of Things to Come, a 1936 adaptation of his futuristic novel.
(Image: © James Vaughan.)

Cinema did not emerge from a eureka moment, but rather through the incremental innovations of pioneers such as the Lumière brothers, Étienne-Jules Marey and Thomas Edison. So it is unsurprising that filmmakers regularly return to science and technology for inspiration.

For every The Social Network, however, there is a Hackers; likewise, rare accomplishments such as 2001: A Space Odyssey tend to be followed by a flurry of ill-advised imitators.

Here are some of the greatest triumphs of cinema’s fertile engagement with science and technology.

A scene from The Iron Horse

Accounts of early cinema often begin with the same anecdote of a naïve audience leaping from their seats to avoid being crushed by the steaming locomotive projected onto the screen. While this story is at the very least exaggerated, few at the time would have doubted cinema’s ability to transport an audience.

It isn’t surprising this late 19th century artform was drawn to the period’s primary means of conveyance, the railroad. And this easy affinity continued into the late silent era with John Ford’s The Iron Horse.

The 1924 western charts the building of the transcontinental railroad: “the buckle in the girdle of America”. The meeting of the Eastern and Western lines at Promontory Summit, Utah in 1869 serves as the film’s climax as two star-crossed lovers are reunited; their eventual embrace symbolic of a country forging a new future.

Such unabashed enthusiasm for technological feats would be tempered as America moved out of the shadow of Manifest Destiny and the true cost of progress was realised. Nonetheless, the film survives as a paean to the transformative power of the railway.

In 1818, writer Mary Shelley gave life to the science fiction genre by applying the new field of galvanism (the contraction of muscle with electric current) to the Greek myth of Prometheus.

Her Frankenstein, a gothic riposte to the hubristic certainty of the Enlightenment, first shuffled onto the screen in a silent film produced by Thomas Edison. The most iconic film version is undoubtedly the 1931 adaptation, in which Colin Clive gesticulates wildly as the Mad Scientist – “It’s Alive!”.

However, the original film was surpassed in 1935 by its sequel. Imbued with a tongue-in-cheek sensibility, Bride of Frankenstein built on the earlier film’s master-servant dichotomy by taking further swipes at the potential pitfalls of unchecked science.

The film’s opening even returns to the book’s inception, as Shelley (Elsa Lanchester, pulling double duty as the author and eponymous bride) sits with her husband, the poet Percy Bysshe Shelley, and “England’s greatest sinner”, Lord Byron.

As lightning bolts strike their appropriately eerie castle, Shelley reasserts the book’s theme for her Romantic era contemporaries and the audience: “a moral lesson of the punishment that befell a mortal man who dared to emulate God”.

Despite the excited rhetoric that is often associated with progress, filmmakers tend to adopt a sceptical position. WALL-E’s lonely trawling through a trash-strewn Earth, the post-apocalyptic wasteland of Mad Max and the future society separated by genetic engineering in Gattaca are all examples of this dystopian view.

However, not every film has chosen such a pessimistic stance. Late in his career, one of the fathers of science fiction, HG Wells, wrote the screenplay for Things to Come, a 1936 adaptation of his own novel.

Anticipating World War II, Wells set his story in an ersatz London in the then near-future of 1940. The outbreak of war plunges this world into a new Dark Age, a malaise which is only broken by the emergence of progress-minded group “Wings Over the World”.

While a utopian society soon follows, modern-day Luddites challenge this technocracy, culminating in an attempt to stop the first mission to the moon. In the closing moments, the “space gun” fires as the society’s leader offers an impassioned speech on the necessity of technological advancement and scientific enquiry, “all the universe – or nothingness … which shall it be?”

In an entertainment landscape dogged by dystopian visions, Wells’s film still shines like a beacon of possibility.

When awareness of networked computers first filtered into Hollywood’s consciousness, filmmakers struggled to understand the new technology. Early depictions included the Oz-like grids of Tron (1982). However, the emergence of social media saw films moving past the novelty to portray computers as part of our everyday lives.

The documentary Catfish is perhaps the most eye-opening account of this transition.

Catfish follows photographer Nev Schulman as he begins corresponding via the web with eight-year-old artist, Abby. Over weeks of interaction, Nev gets to know Abby’s attractive older sister Megan and her mother Angela.

However, when inconsistencies in Megan’s accounts emerge, a suspicious Nev makes an unannounced visit to the family, where he discovers that Angela adopted the various identities through a careful manipulation of social media.

While its Hollywood style reveal caused the documentary’s credibility to immediately be called into question, Catfish offers a nuanced depiction of how — in an era marked by virtual communities — identity can be a matter of choice.

French magician Georges Méliès was one of the first to realise cinema’s ultimate role: to tell stories. Inspired by the writings of Jules Verne, Méliès took audiences on a Trip to the Moon, thereby fixing space travel as a key interest of filmmakers.

However, actual space travel, with its grainy footage and barren moon, proved somewhat of a disappointment for an industry accustomed to lunar colonies and carnivorous aliens. Accordingly, apart from a few notable exceptions — such as The Right Stuff (1983) — these films tend to be set in galaxies far, far away as opposed to being grounded in reality.

In 2013, director Alfonso Cuarón brought space exploration back down to Earth with the appropriately titled Gravity. Here was a big-budget Hollywood production set in space with A-list stars (Sandra Bullock and George Clooney). But rather than featuring warring aliens, the film charted the real-time destruction of a space shuttle and the astronauts' desperate bid for survival.

Liam Burke does not work for, consult to, own shares in or receive funding from any company or organisation that would benefit from this article, and has no relevant affiliations.