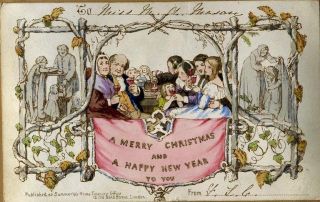 This image shows what's widely considered the first mass-produced Christmas card. It was printed in London in 1843.
(Image: © Courtesy of the Winterthur Library)

The U.S. Greeting Card Association predicts Americans will send about 1.6 billion Christmas cards this year. But the multimillion-dollar industry got off to a humble start with just a thousand cards printed in London more than 150 years ago.

Homemade and handwritten Christmas cards were already popular in Victorian England by the time innovator Sir Henry Cole had a clever idea to speed up his own seasonal card-writing process.

Taking advantage of new printing technologies, Cole commissioned artist John Callcott Horsley to create a festive design, and he produced about 1,000 copies of his own Christmas card in 1843. After Cole used the cards he needed, he sold the rest for one shilling each, according to the Winterthur Library in Delaware, which has a copy of one of those cards donated by the ephemera collector John Grossman. [From Krampus to Smoking Santas: See Images of Early Christmas Cards]

Cole later became instrumental in putting together the 1851 Great Exhibition in London's Hyde Park and developing the South Kensington Museum (now the Victoria and Albert Museum). His card is widely considered the first commercially produced Christmas card. Today, about 20 copies survive in libraries and archives. The British auction house Henry Aldridge and Son actually sold one of the rare, uncolored copies of Cole's card this past Saturday (Dec. 14) to a collector for £4,200 ($6,844 at the time of the sale).

In Horsley's illustration, a family celebrates at center, but lest you forget the charitable side of Christmas spirit, they're flanked by images of people feeding and clothing the poor. There's also a banner that reads "A Merry Christmas and a Happy New Year to You." The trend quickly migrated to the United States. Another early Christmas card from Grossman's collection that was printed in Philadelphia around 1850 similarly shows a family of five around a hearth (while a servant in the background seems to be setting the table). The family is surrounded by food, drink, dancers and snow-covered houses.

Other mass-produced cards of the Victorian era included more holiday images that would become familiar to Christmas revelers today: snowmen, Santa filling stockings, wreaths of holly and children caroling, according to the Winterthur Library.

But some early Christmas card imagery, featured in Grossman's book "Christmas Curiosities" (Stewart, Tabori and Chang, 2008), may look more bizarre to modern eyes: Krampus dragging bad children to the underworld, pine trees kissing, Santa lighting a cigar off a Christmas tree, anthropomorphic mice decorating trees and cats tossing snowballs. OK, people still love pictures of animals acting like humans, but how does one explain the Christmas cards that show a dead bird lying on its back with the words "May yours be a joyful Christmas" above?

"There really isn't much more known about why dead birds are shown on several cards," Grossman wrote in an email. "Another time, another sensibility."