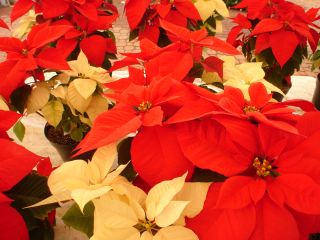 Poinsettias are not as toxic as many people believe.
(Image: © Linda & Dr. Dick Buscher)

The holiday season is filled with traditions like caroling, decorating with boughs of holly and all sorts of partying, drinking and unbridled merrymaking.

It might come as no surprise, then, that the holidays are also filled with some of the world's most durable myths, exaggerations, fictions and outright lies.

Here are some of the most enduring holiday myths. How many have you believed? [7 Medical Myths Even Doctors Believe]

During the 2009-2010 holiday season, almost 50 percent of news articles in which suicide was mentioned perpetuated the story that the suicide rate peaks during the holidays, supposedly when some people feel alone or isolated from family and friends, according to the Annenberg Public Policy Center.

There's just one problem: The story is utterly false. The Centers for Disease Control and Prevention (CDC) reports that the suicide rate is actually lowest in December, and peaks in the spring and fall. "The holiday suicide myth supports misinformation about suicide that might ultimately hamper prevention efforts," according to the CDC website.

Everyone packs on the pounds after the holidays, right? All of those candies and sweets, and big meals and booze have led people to assume that the average American gains about 5 lbs. (2.3 kilograms) or more between Halloween and New Year's Day.

But a 2000 study published in the New England Journal of Medicine found that the average person only puts on about 1 lb. (0.5 kg) during the holidays. The real problem occurs when people fail to lose any weight after the holidays: "Since this gain is not reversed during the spring or summer months," the study authors wrote, "weight gain in the fall and winter probably contributes to the increase in body weight that frequently occurs during adulthood."

Myth 3: Heat loss from the head

In the years after World War II, the U.S. Army Field Manual claimed that 40 to 45 percent of body heat is lost through the head, and the story has been passed down from worried moms ever since.

But in 2006, skeptical scientists tested people in cold water (with and without wetsuits), and found that the head accounts for about 7 percent of the body's surface area, and the heat loss is fairly proportional to the amount of skin that's showing. At most, according to a 2008 report in the British Medical Journal, a person loses 7 percent to 10 percent of their body heat through their head.

Myth 4: A nip will warm you

That warm, invigorating rush you feel after a sip of brandy might feel like a rush of heat, but actually, alcohol is a vasodilator (it increases the size of your blood vessels) and promotes the loss of heat from your body.

In fact, many cases of hypothermia — a potentially deadly condition that results when your body's core temperature drops to 95 degrees Fahrenheit (35 degrees Celsius) or lower — are brought on overconsumption of alcohol. This winter, stay warm by staying dry, not drunk.

Tryptophan is a component of the brain chemical serotonin, which gets converted into the sleep-inducing hormone melatonin. And turkey does contain some tryptophan, but not nearly as much as some other foods.

So why does a holiday turkey dinner make you so drowsy? Consider the mammoth amounts of carbohydrates you're also consuming — stuffing, potatoes and dessert — as well as the relaxing effects of alcohol, and it's surprising that anyone can keep their eyes open after a big holiday meal.

A popular seasonal plant, the poinsettia (Euphorbia pulcherrima) is a native of Central America. Some people, however, live in dread of the colorful flowering shrub, fearing that its leaves and petals contain deadly toxins.

Relax: Though the sap of a poinsettia might cause a rash to people with latex allergies (the plant contains several proteins that are also found in latex), a child who weighs 50 lbs. (23 kg) would have to eat more than 500 poinsettia leaves to reach a potentially dangerous dose — and since the leaves taste horrible, that's not likely to happen. [7 Holiday Stress Busters]

Myth 7: It's the worst time to drive

It's true that the Thanksgiving, Christmas and New Year's holidays are dangerous times to be on the road, not only because of foul weather but also due to the number of boozy holiday revelers behind the wheel.

But Memorial Day weekend is actually the worst time period in terms of fatal car accidents, according to 2010 data from the National Highway Traffic Safety Administration; the Fourth of July and Labor Day weekends round out the top three. The three days surrounding New Year's Eve, however, still constitute the period with the highest number of alcohol-related fatal car accidents. Either way, buckle up and be careful.