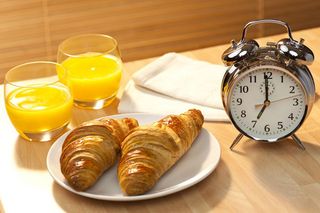 Weight gain may caused in part by eating on an odd eating schedule, rather than only by eating too many calories, a new study in mice suggests.

Mice in the study that were fed a high-fat diet and allowed to eat whenever they wanted to, not surprisingly, gained weight. In contrast, mice that had their feeding restricted to eight hours a day were protected against obesity, despite the fact that they consumed just as many calories as the unrestricted mice.

The findings suggest that restricting meal times might be an underappreciated way to help people keep off the pounds, the researchers said.

"Every organ has a clock," said study researcher Satchidananda Panda, of the Salk Institute for Biological Studies in La Jolla, Calif. That means there are times that our livers, intestines, muscles and other organs work at peak efficiency, and other times when they are — more or less — sleeping, Panda said.

These metabolic cycles are critical for processes such as cholesterol breakdown, and they should be turned on when we eat and turned off when we don't, Panda said. When mice or people eat frequently throughout the day and night, it can throw off those normal metabolic cycles, he added.

Over the 18-week study, the time-restricted mice were protected from the adverse effects of their high-fat diet, and showed improvements in their metabolism compared with the unrestricted mice. They gained 28 percent less weight than unrestricted mice and suffered less liver damage.

Further work is needed to show the same thing happens in people, the researchers said. More studies should collect information on when people eat, and not just what they eat, Panda said.

Panda said there is reason to think our eating patterns have changed in recent years, as many people have greater access to food and stay up late into the night, even if just to watch TV. And when people are awake, they tend to snack, Panda said.

The study is published online today (May 17) in the journal Cell Metabolism.

Pass it on: When we eat may be an important factor in preventing weight gain, a study in mice suggest.