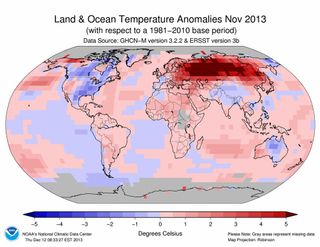 This November was the hottest on record, with only a few spots on Earth cooler than average.
(Image: © NOAA's National Climactic Data Center)

It's confirmed: November 2013 was the hottest November on Earth since at least 1880.

Almost every region was warmer than usual, with a few exceptions: The central and eastern portions of North America, the Southern Ocean near Antarctica, northern Australia and southwestern Greenland were cooler than average. Meanwhile, Russia had its warmest November since 1880, with some areas seeing temperatures 14 degrees Fahrenheit (8 degrees Celsius) above average, according to NOAA. [8 Hottest Places on Earth]

And don't expect a break from the heat, either: 2014 may be even hotter than 2013. That's because climate models are raising the odds of 2014 El Niño conditions, which warm sea water in the tropical Pacific and often raise global temperatures, according to data from the Climate Prediction Center and the International Research Institute for Climate and Society. If El Niño conditions prevail, they would be the first since the hottest year on record — 2010. El Niño conditions could make Southeast Asia and Australia drier and lessen rains in the Indian monsoon. The coast of California could also be battered by stronger storms in winter 2014, Quartz reported