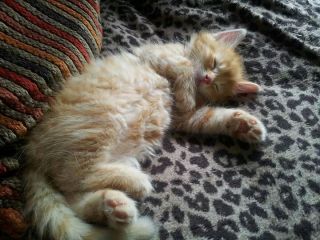 Cat owners could use a refresher on the "birds and the bees," at least when it comes to their feline companions.

New research shows that British and American cat owners harbor some pretty serious misconceptions about the reproductive habits of Fluffy. A study of British cat owners, for example, found that 84 percent of the 715 people surveyed thought cats couldn't get pregnant before the age of 6 months, which isn't true — kittens can actually get pregnant as early as 3 to 4 months of age.

Half of the respondents also said they thought female cats "should" (or "possibly should") have a litter before being spayed, said study co-author Jane Murray, an epidemiologist at the University of Bristol school of veterinary sciences in England. Another 39 percent of respondents thought sibling cats couldn't reproduce, which is false; they can and do. [Ridiculously Cute Photos of Cats and Their Kittens]

Furthermore, one in four of the British respondents thought cats couldn't get pregnant before 1 year of age. In total, the female cats of one in eight of the respondents have given birth to unplanned litters.

Due to these misconceptions, a total of 850,000 unplanned kittens are born each year in the United Kingdom, according to the study, published today (Dec. 16) in the journal Veterinary Record. Due in part to these unplanned pregnancies, as many as 150,000 kittens end up in British shelters every year, Murray told LiveScience.

"There are certainly more cats born than people want to have, in the U.K.," Murray said. "It is a real problem, and the shelters are overwhelmed."

Cat overpopulation is perhaps an even bigger problem in the United States, researchers said.

"Cat overpopulation is at crisis levels," said Julie Levy, director of Maddie's Shelter Medicine Program at the University of Florida's college of veterinary medicine, who wasn't involved in the study. A total of 3 million to 4 million cats end up at U.S. shelters every year, and more than half of them are euthanized, Levy told LiveScience.

"It's interesting that this study from the U.K. confirms findings in the U.S., that pet owners are confused about the reproductive lives of their cats, and that this lack of awareness about how quickly cats can reproduce contributes to unwanted litters and cat overpopulation," Levy said.

"People don't realize that it's difficult to keep a cat from getting pregnant," said Margaret Slater, senior director of veterinary epidemiology at ASPCA, who wasn't involved in the study.

To help prevent unplanned litters, cat owners should get their kittens spayed or neutered at 4 months of age, Levy said.

About 80 percent of owned cats are neutered or spayed, but not always early enough, Slater said. Cat overpopulation strains animal shelters, and sets up many cats for difficult lives, she said. Too many cats also present environmental problems — for example, when cats eat wildlife like birds.

It isn't clear why pet owners in the survey thought female cats should have litters before being spayed, although perhaps they are projecting human values to the cats regarding the importance of family, Levy said.

"One thing I would say is that cats are not people ... and there's no health benefits to motherhood for cats," per se, Murray said. Spaying female cats can actually reduce the likelihood of ovarian cancer, for example, she added. And neutering and spaying cats early enough could also help fight cat overpopulation, which leads to cats being euthanized, Levy said.