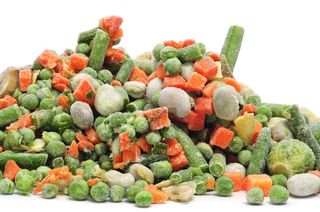 The holiday season is a time when our daily agenda items can be trumped by long-standing traditions, such as baking Christmas cookies from scratch, or taking the time to thread popcorn kernels one-by-one together to make garland.

Many people I know would feel guilty preparing a green bean casserole with frozen beans or (gasp) using frozen corn for grandma's corn pudding recipe. But are frozen vegetables really inferior? What about canned?

Research has provided some answers.

Frozen fruits and vegetables may have higher levels of vitamins A and C, and folate, compared with their fresh counterparts that have been stored for five days, according to a 2013 University of Georgia study. The researchers evaluated the vitamin and mineral content of eight fruits and vegetables and found that some had. [10 New Ways to Eat Well]

This study supports the findings of a 1998 Food Chemistry study, which found that the vitamin C content of frozen peas and broccoli was similar to the typical fresh versions you might find at your local grocer.

There isn't a clear winner and loser in the match between frozen vs. fresh because so much depends on when you consume the fresh produce. But what is clear is that frozen vegetables may have more nutritional value than many have thought.

In the question of how canned veggies compare with frozen, researchers have found that frozen peas may have substantially higher antioxidant activity than their canned or jarred counterparts, according to a 2002 study in the journal Innovative Food Science and Emerging Technologies.

It's true that canning often lowers the content of water-soluble nutrients, and those that are broken down at high temperatures, but more research must be done to determine whether there are other nutritional benefits of eating canned vegetables, according to a 2007 review in the Journal of the Science of Food and Agriculture.

Bottom Line: If you're lucky enough to live near a farm, or be able to eat your produce freshly picked from the vine, then eating fresh produce is probably a better option than frozen or canned.

But most of us aren't that lucky. So according to the research, frozen fruits and vegetables are a suitable alternative, and in some cases may even be more nutritious than fresh. Canned vegetables are a convenience, but may lack the antioxidants found in fresh or frozen versions.