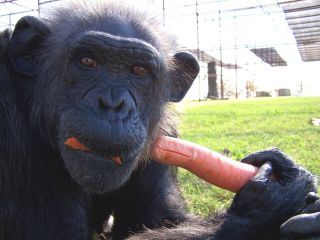 This has been a year of hope and tremendous progress for chimpanzees in laboratories, with pledges from the federal government to transfer hundreds of chimps to sanctuaries in the months ahead.

One chimp left the laboratory more than a decade and a half ago and lived her succeeding years in a sanctuary run by The Fund for Animals, an HSUS affiliate — but she will not see the new year. Kitty, the eldest of three chimps at the Cleveland Amory Black Beauty Ranch, passed away peacefully recently at the age of 51.

Born in the wild in her native Africa, wildlife traders captured her at the age of 10. She was transported to the United States, and she was put into a breeding program to produce chimps for laboratory experiments. Over the course of her life, Kitty gave birth to 14 infants, including two sets of twins. All but four of Kitty's babies were immediately taken from her after birth. Kitty was retired from the breeding program in May, 1997, and arrived at Black Beauty Ranch on June 3, 1997. She lived her life at the sanctuary as the matriarch and leader of her group, which included Lulu, her best friend, and Midge, the youngest of the trio.

Kitty was one smart chimpanzee. She was always the first to explore the areas of her outdoor chimp habitat and the new forms of enrichment that her care team provided to make her time in captivity more stimulating. She was an expert at disassembling whatever contraption was designed to engage her. She also built elaborate nests made of blankets, boxes, hay and stuffed toys, leaving Midge with the scraps she left behind. Her care team always chuckled at Kitty's bedtime set-ups which also usually included a stash of snacks.

When her friend Lulu suffered a stroke, Kitty immediately stepped in and began to care for her by bringing snacks and magazines to her side. This came as no surprise. Kitty's files from her time in the breeding program were full of comments noting excellent maternal care. She was even put into a foster-mother program where she helped inexperienced chimps rear their babies.

Over the last few days as Kitty declined, Lulu was able to return the favor to her friend. Lulu gave Kitty her constant companionship until the end. For those of us who knew her, while our hearts are broken that Kitty is gone, we take comfort in knowing that she spent the last 16 years of her life around chimps and people who would do just about anything for her. She had security, friendship and love, with her basic needs provided to her. She knew the dark side of humanity, people who took her from her home in Africa as an adolescent, shipped her halfway around the world, and then conscripted her into a life as a breeding machine to feed a closed and harsh industry. But she also came to know human kindness and love, and those were surely her most recent memories.

We can never express fully how grateful we are to have known Kitty and how proud we are to have told her story — for her and for all of the other chimpanzees being used in laboratories, some of whom are her children and grandchildren. Kitty is survived by her offspring, her best friends Lulu and Midge and her Black Beauty Ranch family, led by Director Ben Callison.

"I have nothing to fear and here my story ends. My troubles are all over and I am at home," reads the inscription at the entrance to the Cleveland Amory Black Beauty Ranch. We made good on that promise to her. RIP.

Pacelle's most recent Op-Ed was "Bringing an End to Bear Baying" This article was adapted from "Kitty 1962-2013," which first appeared on the HSUS blog A Humane Nation. The views expressed are those of the author and do not necessarily reflect the views of the publisher. This version of the article was originally published on LiveScience.