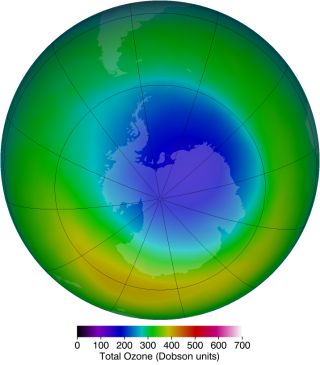 Instead, changes in the South Pole's ozone hole from year-to-year are likely the result of natural variations in wind patterns, researchers said here Wednesday (Dec. 11) in a press conference at the annual meeting of the American Geophysical Union.

"Ozone is produced in the tropics, but it's transported by the winds from the tropics to the polar region," said Anne Douglass, a scientist with the Aura project at NASA's Goddard Space Flight Center in Greenbelt, Md. That transport "varies a little bit from year to year."

The findings suggest that measuring the total size of the ozone hole says little about ozone depletion, and that it's misleading to use the hole's extent alone to measure environmental progress. In fact, people won't be able to see the true impact of reducing ozone-munching chemicals in the atmosphere until around 2025, Douglass and her colleagues said. And, they added, the hole won't be completely healed until 2070. [Top 10 Ways to Destroy Earth ]

Ozone is a molecule made up of three oxygen atoms, and the ozone layer, which stretches from heights of 12 to 19 miles (20 to 30 kilometers) above the Earth's surface, protects life on Earth by shielding it from ultraviolet (UV) radiation.

Until the 1990s, the widespread use of chlorofluorocarbons (CFCs) for refrigerants and aerosols created an ozone hole in the Earth's stratosphere (the second layer of the atmosphere from Earth's surface) over Antarctica. CFCs deplete ozone, because they can bind to oxygen molecules in several chemical reactions, breaking ozone down into regular oxygen molecules. Without the ozone there, harmful UV rays can reach the planet's surface, posing a threat to humans and Earth's other life forms.

An international agreement called the Montreal Protocol, first signed in 1987, gradually phased out the use of CFCs, and the amount of the chemicals in the atmosphere has slowly declined since.

The classic way of measuring the hole is by measuring the total area that contains less than 220 Dobson units of ozone. But the ozone layer extends vertically throughout the stratosphere, so using just one measure is like "looking at a flat table," Douglass said.

That traditional measure may miss what's really going on in the stratosphere. For instance, in 2012, the ozone hole shrank to record lows, even though the level of CFCs in the atmosphere hadn't declined dramatically, said study co-author Natalya Kramarova, also at NASA Goddard. Paradoxically, the ozone hole in 2011 was about as big as it was in 2006, even though CFCs should have declined in those years due to the phasing out of their use.

So Kramarova took a closer look at data gathered by the Suomi National Polar-orbiting Partnership satellite, which showed ozone levels with altitude. The small size of the ozone hole in 2012 was a result of weather bringing in more ozone at higher levels of the stratosphere than usual to Antarctica, masking the depletion at lower levels. [101 Stunning Images of Earth from Orbit]

In a second study, researchers used the Aura satellite's Microwave Limb Sounder to peek inside the ozone hole through chemicals such as nitrous oxide, which inversely varies with levels of chlorine, a byproduct of CFCs, in the Earth's atmosphere.

The researchers found that in 2011, chlorine levels were lower despite the ozone hole's big size. Using a computer model, they showed that weather conditions would have lowered the amount of ozone over Antarctica anyways, and that the big hole was a result of winds from the tropics carrying less ozone to the area than in the years before.

"This is a meteorological effect, it has nothing to do with chemistry," said study co-author Susan Strahan, a NASA Goddard atmospheric chemist.

CFCs are incredibly stable molecules that must travel high into the stratosphere before breaking down, so though the phasing out of CFCs is working, the impact of the Montreal Protocol won't be noticeable in the ozone layer until about 2025, Kramarova said.

Until then, annual measures of peak ozone hole size should be taken with a grain of salt, the researchers said.

The hole won't likely be fully healed until about 2070, Kramarova said.

Of course, for people in the Southern latitudes, UV exposure is only dependent on the size of the hole, so it doesn't matter whether weather patterns or CFCs are responsible for its extent.