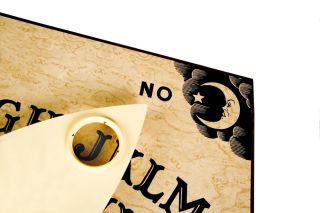 Ouija boards are supposedly used to communicate with the dead. But do they really work?
(Image: © siouxsinner | Shutterstock)

Ouija boards are known worldwide as both a game and supposed tool for communicating with the spirit world. The word Ouija comes from the French and German words for "yes," (oui and ja). The game is simple and consists of two parts: the board itself printed with letters and numbers, and a hand-sized, roughly heart-shaped device called a planchette, designed to slide smoothly over the board (using small wheels or felt pads) when two or more pairs of hands are upon it. Many believe that something other than the human sitters controls the planchette as it moves across the board answering questions and spelling out answers.

There are many varieties of Ouija boards, decorated with a wide variety of symbols including the sun, moon, stars and so on, but the basic elements are the letters of the alphabet, numerals 1 through 0, "yes," "no" and "goodbye." (Of course non-English Ouija boards use their own alphabets and language.) Some even have answers that can be found in another pseudo-mystical children's divination tool, the Magic 8 Ball.

History of the Ouija

Though some sources claim that the Ouija dates back to ancient Greece, it is in fact of much more recent vintage. The Ouija is only one of countless divination tools used for millennia, from reading tea leaves to astrology. The game was invented in the early 1890s by a man named Elijah Bond, who soon sold his patent to a William Fuld, who recognized its moneymaking potential and, in turn, sold the game to Parker Brothers in 1966.

Folklorist Eric Eliason, writing in the "American Folklore" encyclopedia, notes that for much of its early existence, the Ouija board was not considered anything other than an amusing pastime "unrelated to the occult until Pearl Curran, a prominent figure during the World War I-era Spiritualism revival, began touting Ouija as a tool for divining the future, finding lost objects, seeking daily advice, and contacting spirits. Soon thousands of Americans were using Ouija to check up on their loved ones fighting in Europe." Curran is largely responsible for the Ouija board's modern reputation as a "real" tool of prophecy and spirit communication.

Ouija boards are universally recognized as a conduit to the spirit world, but are they real? Do they really do what Curran believed they can do?

Many people certainly believe so; in fact, many Evangelical Christians believe that occult divination tools such as Tarot cards, pendulums, and Ouija boards can connect with, and even summon, evil spirits, including Satan. Not only is using the Ouija board asking for trouble because it might summon evil spirits, but the board (along with role-playing games like Dungeons and Dragons) is believed to actually invite full demonic possession. This is related to Christian concerns of temptation, that genuine Satanic evil can come in the form of otherwise silly and benign games (similar concerns are often expressed about children's participation in Halloween activities). Other "occult" activities viewed with suspicion include forms of divination such as astrology, dowsing, Tarot, and even hypnosis. All are considered forms of witchcraft, which is explicitly condemned in the Christian Bible.

Because of its prominent place in pop culture as a conduit to spirits and demons, the Ouija board has been a staple of horror films for decades. Hundreds of films, including "The Uninvited" (1944), "The Exorcist" (1973), "The Changeling" (1980), "Witchboard" (1986) and "Paranormal Activity" (2007) have featured the boards as a plot device through which spirits, ghosts and demons communicate. Another film, "Ouija," is slated for Halloween 2014.

Parker Brothers, not wishing to alienate large segments of the Christian family board game market, has always promoted the game as it was originally created and intended: as a harmless parlor game instead of a boxed invitation to Satanic possession.

There is no doubt that Ouija boards can spell out names and other words; the question is how the planchette is controlled: by humans or spirits?

Of course, logic and common sense suggest that Ouija boards do not actually communicate with the dead; if it did, surely there would be no unsolved homicides, since police detectives would merely need to pull out the Ouija board to contact the murdered victims and ask how they were killed and under what circumstances. Surely, Jimmy Hoffa, Amelia Earhart, Natalee Holloway and countless other spirits would be more than happy to clarify their mysterious disappearances or name their killers.

If the movement of the planchette across the Ouija board is truly controlled by spirits independently of any human contact, then the game should answer questions without anyone touching it. The human participants should be able to sit back with a drink in their hands, ask questions of the board, and have the planchette magically and mystically scoot around to answer whatever questions anyone has. Of course, that doesn't happen, because it is human movement that creates the answers.

Scientists know exactly how the Ouija board works: it is call the ideomotor effect. The participants unconsciously move the planchette across the board, though because they are unaware of what's going on, they attribute the movement to some external influence or supernatural intelligence. The movements of the planchette across the Ouija board can seem very mysterious to the participants, who all swear that they are not intentionally moving anything (of course now and then a playful prankster helps spell out a message).

Testing the Ouija board is very simple, and can be done by anyone in a few minutes. All it takes are a couple of blindfolds (or a tablecloth or piece of cardboard held just above the board to block the participants' views) and a third person to watch the board and take notes on what it says. The idea is to make it so that the participants themselves can't see where the letters are; after all, if ghosts or spirits truly are guiding the planchette instead of the people, then it shouldn't matter whether those touching the planchette can see the board or not. Invariably, the result is gibberish, a string of random letters and numbers that carry no message at all.

The Ouija board is a game based on self-deception. There's nothing wrong with that — in fact it can be fun and frightening to pretend that it's connecting to the dead — but there's nothing mysterious about it. And if the Ouija board truly was a genuine cosmic connection to another spiritual dimension, do you really think you could buy it next to Monopoly for about $20 at Toys 'R' Us?

Benjamin Radford, M.Ed., is deputy editor of Skeptical Inquirer science magazine and author of six books including "Scientific Paranormal Investigation: How to Solve Unexplained Mysteries." His website is www.BenjaminRadford.com.