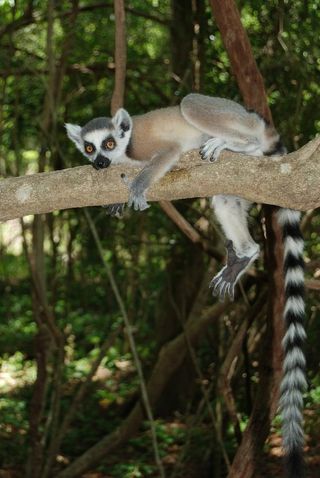 A new study led by CU-Boulder has shown Madagascar's ring-tailed lemurs are the only wild primates in the world that sleep in the same caves on a nightly basis.
(Image: © Michelle Sauther, University of Colorado)

Some of Madagascar's ring-tailed lemurs head to bed in caves every night, new research finds. The study is the first evidence of modern wild primates sleeping regularly in caves.

Early human remains in South Africa have been found in caves, suggesting that although lemurs and humans aren't particularly closely related as far as primates go, there is something in deep primate history that makes caves appealing — possibly protection from predators, said study researcher Michelle Sauther, an anthropologist at the University of Colorado, Boulder.

"We think cave-sleeping is something ring-tailed lemurs have been doing for a long time," Sauther said in a statement. "The behavior may be characteristic of a deep primate heritage that goes back millions of years."

Ring-tailed lemurs (Lemur catta) are part of a branch of primates that includes other lemurs, bushbabies and lorises. Lemurs are found only on Madagascar, and they typically sleep in trees. Sauther and her colleagues found that ring-tailed lemurs in Tsimanampesotse National Park and the Tsinjoriake Protected Area in southwestern Madagascar were doing something quite different.

"They seemed to come out of nowhere, and it was not from the trees," Sauther said. "We were baffled. But when we began arriving at the study sites earlier and earlier in the mornings, we observed them climbing out of the limestone caves." [See Video of the Lemurs and their Caves]

The researchers observed the lemurs between 2006 and 2013, using field observations and motion-sensing cameras. The cave-sleeping may be related to a unique feature of this environment, the spiny forest. In this area, most of the trees are lined with woody spines starting near the ground, making for easy climbing for predators. In areas where lemurs sleep in trees, the branches are high off the ground and form a safe canopy.

The ring-tailed lemur's nemesis is the fossa, a catlike mammal also found only in Madagascar. Modern fossa get as large as fat housecats, weighing in around 20 lbs. (9 kilograms). An ancestral fossa that went extinct only a few thousand years ago likely also would have preyed on lemurs and have grown to be the size of a cougar, Sauther said.

This is the first time that wild primates have been found to use caves as a place to bunk regularly, Sauther and her colleagues reported in November in the journal Madagascar Conservation and Development. Previously, endangered Fusui langurs, monkeys found in Asia, had been seen retreating to caves at night, but the langurs slept in caves only after their forest homes had been logged or clear-cut. The langurs also moved from cave to cave each night instead of returning to the same cave for years.

"The remarkable thing about our study was that over a six-year period, the same troops of ring-tailed lemurs used the same sleeping caves on a regular, daily basis," Sauther said. "What we are seeing is a consistent, habitual use of caves as sleeping sites by these primates, a wonderful behavioral adaptation we had not known about before."