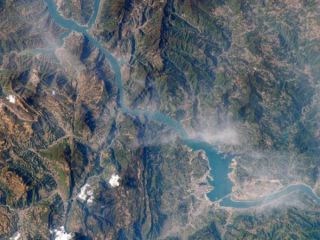 Michael Reuter is director of the Great Rivers Partnership for The Nature Conservancy. He contributed this article to LiveScience's Expert Voices: Op-Ed & Insights.

When I saw her last month she seemed restrained, almost sullen. The wild, brown, churning Yangtze river I knew in 2005 is gone.

This is not a slight behavior modification. The Yangtze ranks among the largest and most powerful rivers in the world. At Yibin, where she forms at the confluence of the Jinsha and Min rivers, the Yangtze moves an average annual flow 10 times that of the Colorado River. (A thousand miles later, when meeting the East China Sea at Shanghai, the average flow has quadrupled.)

At once, like a tiger in a zoo, the river was beautiful to behold, and yet appeared sluggish and dulled by her concrete enclosures.

These are not average dams; they are colossal. They swallow the great Yangtze and all my senses in an instant. The newest dam, Xiangjiaba, located at Yibin, will be able to produce three times the energy of Hoover Dam. A few hours drive upstream, the Xiluodo Dam boasts more than twice that capacity. And farther downstream, the famous Three Gorges Dam can produce twice as much (now 10 times Hoover).

The faces of these dams are massive and unapproachable; their Western Reservoirs Could Be Dry By 2050 reach hundreds of miles upstream. And these are just a few of the many large dams being installed or planned for the Upper Yangtze river basin.

I was astonished by how these dams seem to have arisen overnight. Engineers and builders in China labor with intense purpose. They talk of and are driven by a dream that extends back many centuries. The "makeover" of the Yangtze river is grounded in a cultural history and a multi-generational quest to generate "harmony" and "prosperity" among rivers and the people who depend upon them.

These are dreams for greater flood control, first and foremost, but also for the provision of energy and food and drinking water for the Chinese people.

At Yichang, inside the Chinese Sturgeon Institute, funded by the Three Gorges Power Company, I talked with young scientists who are studying ways to reduce the ecological impacts of this new development. I wondered if they are up to the challenge of creating and restoring ecological harmony for a river in the wake of so many massive structures. Native fish will not be familiar with the new hydrology, the altered temperatures and sediment loads — the barriers to migration. Many will perish. Some will go extinct.

Yet, by engaging these scientists I was re-energized. It is too easy to say the Yangtze is gone. Large rivers are more resilient than that. Yes, this is uncharted territory, but now all of humanity is in that territory, surging forward together. What we do now, and what we learn and share from this experience, will be invaluable for the many great rivers around the world facing their own uncertain futures.

While the Yangtze's challenges are particularly intense, the lessons that emerge there could help people in other river basins strike a better balance of economy, culture and ecology for mutual benefit.

No one can ignore that hydropower will be a critical building block for global economic development over the next two decades. The planet is looking at a current growth rate double or even triple that of the last decade. Chinese construction companies are gearing up to deliver more than half that development, and global hydro-dam capacity is projected to grow from 857 gigawatts in 2008 to nearly 1,500 gigawatts by 2035. At that time, emerging economies will account for two-thirds of global hydropower capacity. If we have any hope that the world can have both this level of energy development and healthy rivers, those of us who love rivers have to engage with dam builders to find solutions.

Whether or not the founders of The Nature Conservancy dreamt as much in 1951, well considered collaborations between conservation and scientific organizations and Chinese state-owned enterprises hold promise. Scientists from the United States and China, for example, have been able to cooperate with operators at Three Gorges Dam to increase fish reproduction by scheduling water releases that simulate a more natural river flow.

We live in a world where conflict and disagreement have become disabling, and yet different perspectives can be the engine of innovation — spawning better ideas, based on better evidence, and pursued with renewed passion. Finding a way to productively engage the planners, developers and operators of major dams in a search for better solutions is ultimately essential if we are to truly realize "harmony" and "prosperity" for rivers and people around the world.

This is what drives the Conservancy's Great Rivers Partnership and the collective vision of our stakeholders. We are building a global community of partners, across sectors, to change the fate of rivers like the Yangtze and to lay the groundwork for more sustainable development on other river systems globally.

Indeed, no dream is too big for China's mother river.