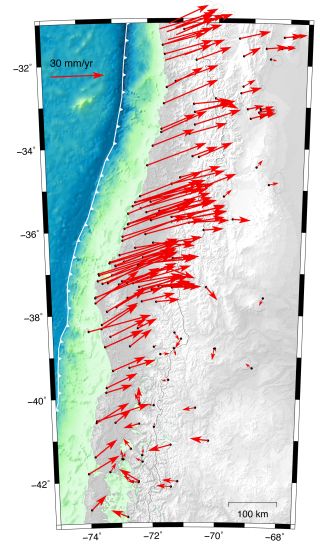 GPS measurements show how the crust shifted after a magnitude-8.8 earthquake in Chile in 2010.
(Image: © GFZ)

An incredibly detailed look at Earth's twitches and shudders after a magnitude-8.8 earthquake in Chile reveals a potential new trigger for aftershocks, the smaller temblors that follow an earthquake.

The findings, published Dec. 1 in the journal Earth and Planetary Science Letters, come from a massive research effort to conduct an earthquake "autopsy" in Chile.

The Feb. 27, 2010, Maule earthquake struck offshore, on a subduction zone where the Nazca tectonic plate crashes into and dives under the South American tectonic plate. The two plates slid past each other by up to 50 feet (16 meters) in some spots.

After the earthquake, researchers set out 67 GPS stations and seismic monitoring equipment to track subtle shifts in the Earth's crust. Such surface changes hint at what is happening deep below, in the subduction zone, where the plates are adjusting to their new positions. The monitoring revealed the subduction zone slipped another 6.5 feet (2 meters) in the 420 days following the earthquake. And the fault (the thin zone where the two plates meet) moved in pulses in various places, rather than sliding as one continuous zone, the researchers found. For example, the region around Chile's Arauco Peninsula drifted less than the fault did farther to the south, with some spots varying by more than 40 inches (100 centimeters). [Image Gallery: This Millennium's Destructive Earthquakes]

But to their surprise, the researchers discovered the fault zones with the biggest post-earthquake slip didn't match up with the regions that had the most intense aftershocks. Instead, the biggest fault shifts happened silently, the team said in a statement. "Areas with large stress transfer do not correlate with aftershocks in all magnitude classes as hitherto assumed," Jonathan Bedford, lead study author and a researcher at the Helmholtz Center GeoForschungsZentrum Potsdam in Germany, said in a statement.

Aftershocks have been thought to result from Earth's crust responding to added stress from earthquakes. However, the new findings suggest a different process may also be at work, at least in the Chilean subduction zone, the researchers said.

"Our results suggest that the classic view of the stress relaxation due to aftershocks are too simple," Bedford said.

Bedford and his colleagues said that fluids pushing into the fault zone along fractures opened during the main earthquake could trigger aftershocks. This would create an aftershock pattern that is independent of the surface changes caused by earthquakes, as seen in the new study, the researchers said.