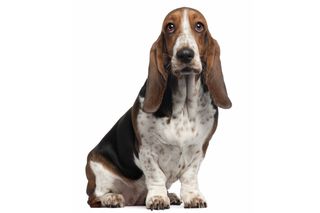 It can be adorable, but there are times dogs just can't figure some things out.
(Image: © Dognition.)

Brian Hare is an associate professor in evolutionary anthropology at Duke University. Hare is the founder of Dognition, a Web-based service that helps find the geniusin your dog. This post was adapted from the New York Times Bestseller "The Genius of Dogs" (Dutton Adult, 2013). Hare contributed this article to LiveScience's Expert Voices: Op-Ed & Insights.

Since I spend a lot of time talking about how dogs are geniuses, I thought it might be fun to think about instances when the world becomes a bit of a challenge for our furry friends.

In 2005, I was living in Germany, working on a paper on how smart dogs are. When I moved to that country, I had no idea it meant I would be walking five miles a day. Most people ride bicycles around the city of Leipzig. This was out of the question for me because of my dog, Milo, who had the unfortunate habit of passing any tall post on the opposite side of me. When he was wearing a leash, we would both end up tied around the post — a disaster if I was traveling 20 mph on a bike. So, until Milo learned to follow me while detouring around such posts, I decided to walk — which ended up becoming my permanent mode of transportation.

Experiments have shown that dogs do not understand the principle of connectivity. Harry and Martha Frank from the University of Michigan, gave dogs and wolves a variety of tasks in which the animals had to pull a rope to bring a food dish within their reach. Only the wolves immediately solved the various rope-pulling problems, while the dogs never solved the more complicated versions.

Another experiment from researchers at the University of Exeter in the United Kingdom showed that dogs find it difficult to learn how to use a string to pull food out of a transparent box. At first, dogs ignored the string — they kept scratching at the food through the transparent box top, and it took dozens of trials for them to discover the solution by accident.

Once dogs learned to pull the rope in order to pull out the food, if the position of the ropes was only slightly altered, the dogs could no longer solve the problem.

And if the food was moved close to the box's opening, the dogs forgot about the string altogether and resorted to an ingenious but ineffective licking technique of trying to stretch out their tongues to grab the food.

Dogs did slowly get better at the task, but another experiment showed that they were not learning anything about the cause of their success. Instead of one string, there were two strings crossed in the shape of an X, and only one string was attached to the food. Dogs were attracted to the food, and then pulled the end of the rope that was closest to it. They did not understand that the rope needed to be connected to the food.

In comparison, both primates and ravens (the "apes" of the bird world)tend to be skilled at solving a series of related problems. When it comes to understanding connectivity, dogs look as bad as cats, who also get tangled up on the same tests.

For another example, consider how dogs are famous for their keen sense of hearing. They often hear things that are out of the human hearing range. They certainly understand the vocalizations of others, but there are also nonsocial noises. If a dog stands at the edge of a waterfall, would it know that the crashing sound is the force of the water and to stay away?

A simple experiment suggests dogs might not understand this concept. Researchers gave a group of dogs the choice of searching for food in one of two containers after a human shook one of them. Sometimes, the container made a noise, and sometimes it did not. If dogs can understand that objects create noise when they collide, the dogs should look in the container that makes a noise rather than in the one that is silent. However, dogs always chose the cup a human touched, regardless of whether it made noise when it was shaken or not.

From the number of times my dogs have tried to give me a tennis ball by placing it next to me while I was seated on an incline, I've long suspected that dogs do not really understand gravity.

In a study to test that question, dogs watched an experimenter drop food through a tube into one of three boxes. Sometimes, the tube went straight down into a box, and sometimes the tube went into a box that was not directly underneath.

When the tube went straight down, dogs understood that gravity would make the food fall into the box underneath. But when the tube angled into a different box, dogs did not understand that the tube would prevent gravity from allowing the food to fall straight down. The lack of spontaneous success makes it unlikely that dogs understood what caused the dropping food to defy gravity. [Do Animals Know Who they Are? (Op-Ed)]

From what we know so far, it is unlikely that a dog will win a Nobel prize in physics anytime soon. This explains why dogs drop balls on a hill, and why they should not be left unattended when they are tied to a tree. Dogs are social geniuses — but when it comes to understanding the unobservable properties of the physical world, they are no Einstein.

The author's most recent Op-Ed was "How Do Dogs Learn Words? Just Like Kids." The views expressed are those of the author and do not necessarily reflect the views of the publisher. This version of the article was originally published on LiveScience.