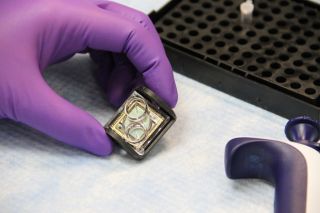 This small chip, containing the DNA of eight lung cancer patients, can perform up to 400 genetic tests in one pass. Researchers at The Ohio State University`s James Cancer Hospital and Solove Research Institute and Comprehensive Cancer Center, put a barcode on each patient`s DNA, then use that information to quickly determine which medications will work best for each patient.
(Image: © The Ohio State Comprehensive Cancer Center - James Cancer Hospital and Solove Research Institute.)

Lung cancer remains the number one cause of cancer death in the United States, and in the world, among both men and women. More than 200,000 cases are diagnosed annually in the United States. Each year during the month of November, physicians and others observe lung cancer awareness month, which sheds light on this terrible disease.

To highlight the connection between lung cancer and smoking, the American Cancer Society encourages everyone on the third Thursday of November to quit smoking by participating in the Great American Smokeout. This is an important step towards reducing your cancer risk (as well as your risk of heart and lung disease).

The majority of people with lung cancer are either smokers or have a history of smoking, but 15- to 20-percent of people affected by the disease in the United States have never smoked.

Half the people diagnosed each year with lung cancer have metastatic disease at diagnosis, which is generally considered incurable. Physicians are trying to change that in a number of ways, including screening patients at risk of lung cancer and developing new, targeted treatments for specific patients.

Imagine your doctor being able to scan your DNA from a biopsy and pinpoint the medicine that will work best for you. This type of high-tech approach is a clinical reality for advanced lung cancer at The Ohio State Comprehensive Cancer Center – Arthur G. James Cancer Hospital and Richard J. Solove Research Institute (OSUCCC – James).

The technology, known as next generation "multiplex" gene sequencing, analyzes 50-plus genes in DNA extracted from a tumor biopsy for particular genetic mutations.

Previous technology required pathologists to analyze one mutation per tube in a sequencing reaction, but next-generation genome sequencing assesses more than 2,500 mutations in a single reaction. [ Lung Cancer Cases On the Rise in Non-Smokers, Study Suggests ]

Knowing which mutations are present in lung tumors can help doctors tailor a patient's treatment to the unique genetic features present in his or her cancer cells. The knowledge can also help in the development of new drugs that target previously unrecognized gene mutations in lung tumors. I often compare these genes to the gas pedal in a car — when activated, these genes make the cancer grow. By breaking the linkage between the gas pedal and the motor (or interfering with these "driver" mutations) with specific targeted drugs, doctors can stop this growth and often make the cancer shrink. That's especially important in lung cancer because the majority of patients with this disease are diagnosed in the later stages, meaning it's important to start effective therapies quickly.

For example, a patient could be given a standard chemotherapy and expect a 25- to 30- percent response rate/shrinkage of a tumor. But if the treatment team knows that a patient has a mutation in a gene called EGFR, we can offer him or her a pill (erlotinib and afatinib are approved for this use in the United States), which has a 75-percent response rate and fewer side effects.

In addition to doing a far better job of finding mutations, this technology is faster, uses patients' tumor samples efficiently and reduces the cost of genomic testing, making it accessible to more patients.

Lung cancer screening is available to individuals with a history of heavy smoking at The OSUCCC – James. If you are interested in learning more about screening, treatment and clinical trials, call 1-800-293-5066.