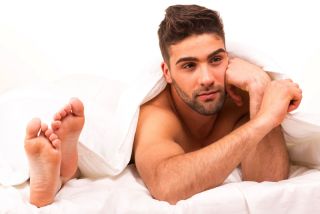 Gentle touching triggers the release of opioids in the brain that may underlie social bonding.
(Image: © Hugo Felix, Shutterstock)

Sometimes, science requires test tubes and Petri dishes. And other times, it involves stroking men wearing only their underpants.

In a new study, researchers from Aalto University in Finland imaged the brains of scantily clad men who were being gently touched by their partners. The social contact activated chemicals in the brain's opioid system that may be critical for maintaining social bonds with others.

From romantic partners to family members, humans maintain many long-term relationships. Recently, scientists have suggested the opioid system, which is involved in pain, reward and addictive behaviors, could be the brain pathway that maintains these bonds. [How Do I Love Thee? Experts Count 8 Ways]

To test this idea, researchers scanned the brains of nine men using positron emission tomography (PET), which detects radiation emitted by a tracer molecule to construct a 3D image of the brain.

The researchers examined how much binding occurred at opioid receptors in the brain. Preliminary analysis, reported Nov. 11 at the annual meeting of the Society for Neuroscience in San Diego, Calif., showed a spike in natural opioids in the ventral striatum and anterior cingulate cortex, critical parts of the brain's reward circuitry.

By activating the opioid system, gentle touching may be the glue that maintains social bonds between people, the research suggests. The results of the study have not yet been published in a scientific journal.

Previous studies in animals have shown opioids play an important role in pair bonding. For example, prairie voles are monogamous in the wild, but in studies where researchers give them a drug that blocks opioids in their brain, the animals start to philander. And in monkeys, blocking opioids causes them to groom each other less and stop caring for their babies.