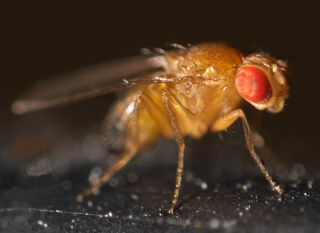 Fruit flies come from the up to 500 eggs adults lay. And, they can live off of any moist, fermented substance.
(Image: © Wikimedia commons user Mr.checker)

Female fruit flies have a secret superpower: Just by their presence, they keep male flies from butting heads.

A new study revealing this strange insect phenomenon could eventually lead to new understandings of how human aggression functions.

"This is really an entry point to study how aggression can be modulated," said Yuh Nung Jan, a professor of physiology and biochemistry at the University of California, San Francisco. [Fight, Fight, Fight: A History of Human Aggression]

Hanging around ladies may or may not tamp down aggressive urges in men, but for fruit flies, females have a calming effect, Jan and his colleagues report today (Nov. 17) in the journal Nature Neuroscience.

Postdoctoral researchers in Jan's lab noticed that the fruit flies (Drosophila melanogaster) they use for basic research behaved very differently depending on their company. Typically, two fruit fly males placed in an enclosure together will exhibit low-level aggression: They'll head butt each other or toss one another around, but only occasionally. If a male fly has just finished mating with a female, however, a male third wheel is decidedly unwelcome. Most likely, Jan said, the male that has mated becomes aggressive in order to prevent the other fly from courting his partner.

There's an exception to this post-coital offensive, however. If a male fly has spent time in the previous days with a female fly, his after-sex attitude toward other males is entirely chill.

To figure out what was going on, Jan and his colleagues housed virgin male flies in male-only bachelor pads for six days. On the seventh day, half of the flies were introduced to virgin females. Flies are "very efficient" at mating, Jan said, so the flies' virginities didn't last more than 30 minutes past the introduction.

Next, each fly submitted to an aggression test. Two males and two virgin females were put in an enclosure and allowed to pair off and mate. Then the males' post-coital aggression was recorded. Sure enough, the controlled conditions revealed that males that had spent the previous day in feminine company were much less bellicose than those that had been kept with males only.

Getting in males' heads

At first, the researchers figured the aggression decrease was an after-effect of sex. But surprisingly, they were wrong, Jan said. When allowed to mate with a female that was then immediately taken away, males were just as aggressive the next day as if they'd never hung out with a lady fly at all.

And when males spent time with female flies that were not receptive to mating, they were still less aggressive than if they hadn't hung out with females, despite not having had sex at all.

Some other communication between the female and male flies had to explain the change. The researchers set about the process of elimination, testing fruit fly varieties that have been genetically engineered to lack eyesight, smell and other senses.

"Finally, we found that what's important is contact," Jan said.

It turns out that a pheromone-sensing structure on the male's leg bristles is responsible for sensing a pheromone, or chemical communication signal, present on the female's body. The researchers followed up with an analysis of the brain region that receives these signals and found a cluster of neurons responsible for dampening aggression in response.

The neurons are part of a system that responds to the neurotransmitter gamma-aminobutyric acid, or GABA. This is the first time GABA has been found to be important in regulating aggression, which is interesting because mammals have the same types of neurotransmitters as flies. Scientists have shown that in humans, Jan said, the neurotransmitters serotonin and dopamine are linked to aggression, but the fly study suggests that GABA might be worth looking at as well.

"You might ask whether the GABA system in vertebrates might be involved in aggression," Jan said. "That's really unknown."