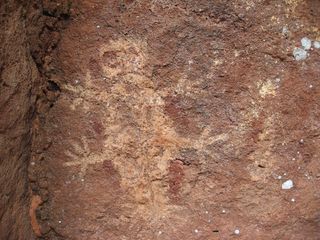 White-lipped peccaries may not be glamorous-looking, but like their truffle-sniffing cousins, they sometimes turn up treasure.

On the trail of the pig-like creatures in Brazil, researchers made an unexpected and rare discovery: cave drawings showing armadillos, birds and reptiles, etched into stone thousands of years ago.

Archaeologists who examined the rock art say hunter-gatherers likely created the drawings between 4,000 and 10,000 years ago. [Photos of Amazing Cave Art]

Researchers with the Wildlife Conservation Society (WCS) made the find while surveying white-lipped peccaries in Brazil's Cerrado plateau, a vast savanna region, in 2009. The animals, which travel long distances, are considered environmental indicators of healthy forests.

"Since we often work in remote locations, we sometimes make surprising discoveries, in this case, one that appears to be important for our understanding of human cultural history in the region," Alexine Keuroghlian, a researcher with WCS's Brazil program, said in a statement.

The researchers encountered a series of sandstone formations with caves containing the artwork while tracking the peccaries near the remote city of Corguinho, in the Brazilian state of Mato Grosso do Sul.

Archaeologists say the style of the drawings is more diverse than expected. While some resemble ancient art from the central Brazilian plateau, others, surprisingly, seem etched in the artistic tradition of northeastern Brazil, the researchers said. In addition to human figures and geometric shapes, many different kinds of animals were represented, from big cats and armadillos to birds and reptiles, but alas, no peccaries.

The cave art is described (in Portuguese) in the journal Revista Clio Arqueológica.

"These discoveries of cave drawings emphasize the importance of protecting the Cerrado and Pantanal ecosystems, both for their cultural and natural heritage," Julie Kunen, director of WCS's Latin America and the Caribbean program, said in a statement. "We hope to partner with local landowners to protect these cave sites, as well as the forests that surround them, so that the cultural heritage and wildlife depicted in the drawings are preserved for future generations."

The white-lipped peccary, whose scientific name is Tayassu pecari, is listed as a vulnerable species by the International Union for Conservation of Nature (IUCN), the world's main authority for the conservation status of wildlife. The animal's range extends from southern Mexico to northern Argentina. It faces threats in the wild, including deforestation and hunting.