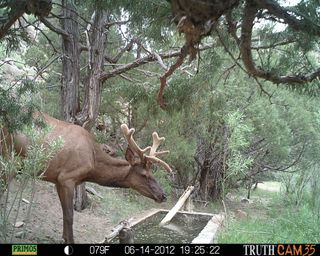 An elk gets a drink from a BLM watering hole.
(Image: © Bureau of Land Management Colorado)

A hunter stumbled upon a bizarre sight on a 75,000-acre ranch north of Las Vegas, N.M., on Aug. 27: the remains of more than 100 dead elk. Livestock deaths are not unusual, but so many animals dying off, and doing so in what seems to be under 24 hours, was puzzling to scientists.

Officials with the New Mexico Department of Game and Fish investigated the mysterious elk deaths and ruled out several possible causes for the elk deaths, including poachers, anthrax, lightning strikes, epizootic hemorrhagic disease (an often-fatal virus known to affect deer and other ruminants), botulism, poisonous plants, malicious poisoning and even some sort of industrial or agricultural accident.

The investigation was hampered by the state of the elk: Scavengers, including bears and vultures, ate most of the bodies, with maggots and blowflies helping to reduce the elk herd to an eerie scattered sea of skeletons in the desert. [Spooky! Top 10 Unexplained Phenomena]

"We couldn't find anything [toxic] in their stomachs and no toxic plants on the landscape," said Kerry Mower, a wildlife disease specialist with New Mexico Department of Game and Fish, as quoted by the Santa Fe New Mexican newspaper.

As news spread, some conspiracy-minded folk soon speculated about links to animal mutilations, UFOs or even the dreaded Hispanic vampire el chupacabra.

Through science and further testing of elk tissue samples and water samples, the real killer has finally been found: pond scum. Or, more specifically, a neurotoxin produced by one type of blue-green algae that can develop in warm, standing water.

A bloom of this alga can be devastating to wildlife. "In warm weather, blooms of blue-green algae are not uncommon in farm ponds in temperate regions, particularly ponds enriched with fertilizer," according to a classic toxicology reference book, "Casarett and Doull's Toxicology: The Basic Science of Poisons" (McGraw-Hill Professional, 2013). "Under these conditions, one species of alga, Anabaena flos-aquae, produces a neurotoxin, anatoxin-A, which depolarizes and blocks acetylcholine receptors, causing death in animals that drink the pond water. The lethal effects develop rapidly, with death in minutes to hours from respiratory arrest."

In other words, the elk herd suffocated to death, unable to breathe. And the fast-acting toxin explains the animals' strange, sudden deaths. In this case, the algae appeared not in ponds, but in three fiberglass livestock watering tanks not far from where the elk died. The elk also showed signs they had struggled on the ground, further supporting neurotoxin poisoning.

"Based on circumstantial evidence, the most logical explanation for the elk deaths is that on their way back to the forest after feeding in the grassland, the elk drank water from a trough containing toxins created by blue-green algae or cyanobacteria," Mower said in a statement from the Department of Game and Fish.

The algae-produced neurotoxin is similar to curare, the famous toxin found in poison-tipped arrows used by South American Indian tribes. Though anatoxin-A can be deadly to other animals, including dogs and cattle, reports of human deaths are rare. New Mexico ranchers have been advised to sanitize their livestock tanks to prevent further wildlife deaths.