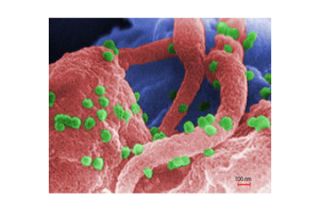 Nowhere to hide: HIV-1 on the surface of a white blood cell.
(Image: © Microbe World.)

HIV uses an “invisibility cloak” made up of a host body’s own cells, a team of researchers has found, in a discovery that represents a significant step forward in our understanding of the virus and could lead to new ways of fighting it.

In a study published in Nature, the team from University College London and the Medical Research Council Laboratory of Molecular Biology explains how HIV uses molecules inside host cells in an infected person to avoid alerting the body’s innate immune system (IIS) – cells and mechanisms that form the first line of defence in our bodies – to its presence.

By using the host’s own cells to hide, the virus is able to replicate in the body undisturbed. The team was able to identify how the HIV virus used this cloaking tactic, and was then able to look at how the viral invader might be uncloaked.

Greg Towers, lead author on the study, explained how the discovery might potentially pave the way for different treatments than those currently used. “HIV uses certain molecules in cells, called ‘host factors’, to hide from the body’s immune alarm system,” he said. “We realised one of the host factors is relatively easy to drug, meaning the virus cannot use it to hide.”

Using an experimental drug based on cyclosporine, widely used to prevent organ rejection after transplants, the researchers were able to target these “host factors” directly and rob the virus of its hiding places by making the HIV virus’s interaction with the host cell molecule impossible.

This approach differs from other methods of fighting the HIV virus because its focuses on making changes to the immune system rather than the virus.

“Where this differs from classical anti-viral treatment is that you’re not directing the drug at the virus itself, you’re essentially preventing the host from hosting the virus,” Towers said. “The anti-viral effect is thus provided by the IIS and not directly by the drug.

He added: “One reason that creating an HIV vaccine is so difficult is because the virus is essentially invisible to the IIS. So when you try to vaccinate, the IIS doesn’t understand what it’s trying to make an immune response against. "Uncloaking” the virus, as our work describes, allows us to reveal the virus to the IIS, and thereby stimulates the immune system – which is obviously a very powerful thing once it knows what it’s responding to.”

In the face of high infection rates – 2.3m people are estimated to have been newly infected with HIV last year – this study represents a significant step forward in science’s knowledge of how the virus itself works.

Michael Mallim, Professor of Infectious Diseases at King’s College London, studies the mechanisms of HIV infection and host-virus interactions. He said the study opened up areas for research.

“This is an exciting and provocative study that illuminates a previously unappreciated aspect of HIV infection,” he said. “The prospect that future pharmacologics can promote the body’s initial recognition of HIV infection, thus enabling more effective immunity, is a fascinating one. This work will unleash new avenues of investigation.”

More research was needed, Towers said, but their findings could be used to develop different types of drugs to tackle the virus.

“The potential for this approach is huge as a possible treatment in itself, but also as a complement to existing therapies. We’re also interested to see whether blocking these cloaking molecules can help to boost immune responses to experimental vaccines against HIV or be used to protect against HIV transmission.”

Stripping HIV of its invisibility cloak, he added, might one day pave the way for treatment that could clear HIV from the body before the infection is able to take hold – a goal that has remained elusive ever since the virus was first discovered.

Mark Nelson, a Clinician and Reader in Medicine at Imperial College Medical School, said there was still not enough understanding about the biology of the HIV virus. “Despite the current high rate success of therapy for HIV as regards preventing viral replication, new therapeutic approaches are welcome,” he said. “A greater understanding of the biology of HIV and how it evades the immune system will permit development of such agents. These results are early and how they translate into a possible therapeutic agent for the treatment of HIV are uncertain.”