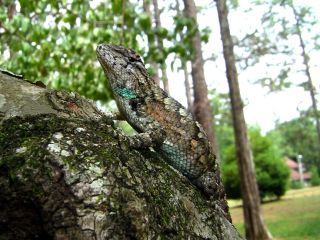 For female fence lizards, it's just not easy being blue. For one, the guys all ignore you.

Brilliant blue markings on the neck and underbelly are male traits in fence lizards (Sceloporus undulatus), but in some populations, as many as 95 percent of females boast similar, though fainter, markings. New research finds this decoration is no good for the scaly girls, and may even be an evolutionary remnant that could disappear from the species.

"Nobody's ever looked for the cost of these male-associated traits before," said study researcher Tracy Langkilde, a biologist at Pennsylvania State University.

Lindsey Swierk, a doctoral candidate at Pennsylvania State University, was researching fence lizard reproductive strategies when she noticed that males were avoiding females with blue markings, also known as badges. She and Langkilde decided to find out why. [Photos: Bizarre Frogs, Lizards, and Salamanders]

That data revealed that the blue-marked females laid lighter-weight eggs — a sign that the moms were investing fewer resources in their offspring. They also laid their eggs later in the season, which likely meant they got pregnant later — and that they were "the last lizards left on the shelf," Langkilde told LiveScience.

"The males finally go, 'All right, it's your turn" to mate, she said.

Blue markings are linked to higher testosterone levels, which can hinder female reproduction and immune function. Males may snub blue-bellied females because the markings are a trait associated with less robust immune systems, Langkilde said. Or, males' disinterest might be the reason females with badges don't give birth to hardier offspring. These females may not get to mate as early in the season and, thus, have weaker broods. Either way, the later egg laying is probably bad news for baby lizards, Langkilde said, as they have less time to stock up on fat stores for the winter.

In a second experiment, the researchers put male fence lizards in an enclosure and placed a female at either side of the enclosure. Males that are interested in a female court her with a strange dance.

"These males do these really sharp, jittery movements that look like they're under a strobe light, and — I don't know — "it's sexy, apparently," Langkilde said.

The males largely ignored females with blue markings, Langkilde said, spending the vast majority of their time with the unmarked sweethearts. In the 35 percent of sessions that resulted in mating, the males spent 90 percent of their time courting the female with which they ultimately mated. That means that courting is linked to sex, and that the blue females would likely be left out.

So, why do females have blue markings at all, if they're so detrimental? It's possible that the markings are related to a trait that helps the ladies out in other ways. Because blue-bellied gals have higher testosterone, they might be more aggressive or competitive in times of scarcity. Or, perhaps they have vividly colored "really sexy sons" that pass on their genes prolifically, Langkilde said. Or maybe there's no reason at all.

"It could be that females have the badges just because that's a relic of their evolutionary past and they're starting to lose it now," Langkilde said.

If that's the case, blue badges should be disappearing from female lizards in the wild. Langkilde and Swierk have data on the number of females with blue markings from seven years ago, so they can go back to the same areas to check if the proportions have changed. The researchers reported their findings today (Nov. 5) in the journal Biology Letters.