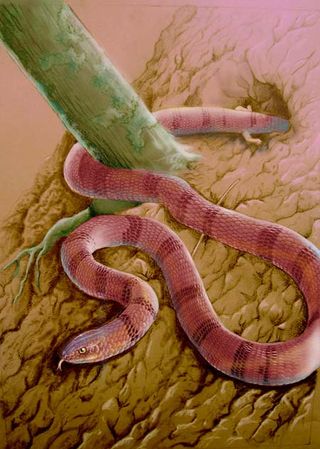 Once upon a time, snakes had legs. A new discovery reveals at least one had hips, too.

The newfound fossil could help scientists piece together the murky evolutionary history of snakes. Until now, the prevailing thought was that early snakes were already lacking legs when they slithered out of water and onto land.

That may not be true, however.

Scientists unearthed Najash from continental sediments, suggesting it led a life on land. It also shares vertebral and skull characteristics common among modern terrestrial snakes and necessary for life on land.

Mosasaurs were a type of aquatic, serpentine reptile that had paddle-like limbs to help it swim around. The previous hypothesis was that snakes came into existence as these paddles atrophied.

Najash knocks three fossil marine snakes with developed hind limbs—Haaisophis, Pachyrhachis, and Eupodophis—from the base of the snake family tree, claiming the title of most-primitive known snake. These other species lacked hip bones, and Zaher's analysis suggests they were closer to some more advanced snakes.

The real kicker is that the snake has hip vertebrae, which likely allowed the critter to use its legs to dig and crawl. It probably led a burrowing lifestyle similar to modern burrowing snakes.

"Morphologically, the legs are absolutely functional," Zaher said. "Although, we cannot really say for sure how these snakes used these legs."

Later on, snakes lost their hips, and their hind legs, as they became more specialized to various aquatic and terrestrial lifestyles.

The finding is reported in the April 20 issue of the journal Nature.