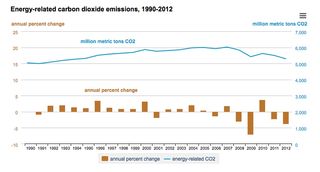 The trends in U.S. carbon dioxide emissions from 1990 through 2012 and the annual percentage change in emissions each year.
(Image: © U.S. Energy Information Agency)

A mild winter, new car efficiency standards and the continued switch from power plants run by coal to those fueled by natural gas, a cleaner-burning fuel, were behind a 3.8-percent drop in U.S. carbon dioxide emissions in 2012, announced by the U.S. Energy Information Administration Monday (Oct. 21).

The drop was the second largest since 1990, beat out by the drop of 7.1 percent in 2009, which was attributed in large part to the recession that hit the country that year. Emissions have dropped for five out of the last seven years, the EIA said, and current emissions are down 12 percent from a peak in 2007.

In raw numbers, the country released 5,290 million metric tons of carbon dioxide in 2012, down from 5,498 million metric tons released in 2011, according to EIA numbers. The decline came despite a rising population and an increase in gross domestic product, which generally equates to more consumption.

"This latest drop in energy-related carbon emissions is reason for cautious optimism that we're already starting to move in the right direction," Michael Mann, a Penn State climate scientist, told the Associated Press. "But this alone will not lead us toward the dramatic carbon reductions necessary to avoid dangerous climate change."

The rising global release of carbon dioxide over the past few centuries, largely since the onset of the Industrial Revolution, has steadily increased the proportion of the greenhouse gas in Earth's atmosphere. The latest report from the Intergovernmental Panel on Climate Change, the UN-created body that examines the latest science on the causes and implications of climate change, put the share of carbon dioxide in the atmosphere at 390.5 parts per million in 2011, a 40-percent increase from 1750 and the highest reported levels of carbon dioxide in the last 800,000 years. (Parts per million, or ppm, are used to note the concentration of a gas in the air, or the number of molecules of gas, in this case 390.5, for every million molecules of air.)

All of that carbon dioxide increased Earth's average global temperature by 1.6 degrees Fahrenheit (0.89 degrees Celsius) from 1901 to 2012. The IPCC said in this report that it is "extremely likely" that human activities, such as industrial activity, logging and power generation, have caused most of this warming. [Video: Earth's Surface Warming Since 1880]

The IPCC and leading climate scientists have said that greenhouse gas emissions, particularly carbon dioxide, will need to be curtailed significantly to avoid much more drastic temperature rises and the knock-on effects they can have on the planet, including changes to ecosystems and animal's ranges, changes to weather patterns, warming of the oceans and melting of polar ice.

One factor behind 2012 decline in emissions was the continued introduction of more energy-efficient cars and other vehicles. In August of last year, the Obama administration introduced new Environmental Protection Agency fuel standards aimed at increasing fuel economy to 54.5 miles (88 kilometers) per gallon by 2025, in part as an effort to reduce the nation's carbon dioxide emissions. A press release from the Environmental Protection Agency at the time of the announcement revealed the program would reduce emissions by 6 billion metric tons over its lifetime.

The continuing switch to power pants fueled by natural gas rather than coal, which emits more carbon dioxide, also helped to lower the nation's emissions in 2012. As did a relatively mild winter and cool summer for much of the country, which reduced the demand for heating fuel and for electricity to power air conditioning, respectively, yesterday's EIA release noted.

The six-month total of carbon dioxide emitted so far in 2013 is 2,664 million metric tons, about on par with last year's six-month mark.