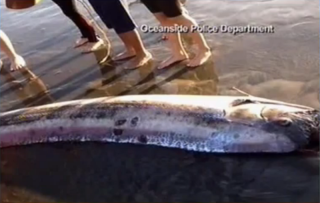 For the second time in a week, a rarely seen type of deep-sea creature was found along the coast of California.

The carcass of a 14-foot-long (4 meters) oarfish washed ashore in Oceanside, just north of San Diego, on Friday (Oct. 18), according to the The Los Angeles Times.

The find came less than a week after a science instructor on Catalina Island, off the coast of Southern California, dragged in an 18-foot-long (5.5 m) dead oarfish that was floating just offshore on Sunday, Oct. 13. [See Video of the Latest Oarfish Found]

Oarfish are thought to lurk below 3,000 feet (915 m), and they are rarely found near the shore. The fish typically only arrive on the coast once they are sick or dead, Jeff Chace, with the Catalina Island Marine Institute, told LiveScience's OurAmazingPlanet last week.

The 18-foot specimen that turned up on Catalina Island last week appeared to have died of natural causes, Chace said.

The oarfish that washed up in Oceanside was cut up into sections and carted away to be examined by scientists with the National Oceanic and Atmospheric Administration (NOAA), The Times reported.

Oarfish get their name from the long paddle-like appendages that help them balance. The animals are the world's longest bony fish and are thought to grow up to 50 feet (15 m) long.

The last time a large oarfish was discovered in the region was when a group of Navy SEALS found a 23-foot-long (7 m) specimen in 1996 off Coronado. Two years ago, researchers glimpsed the creature in its natural habitat, capturing a rare video of a live oarfish using a camera deployed deep underwater in the Gulf of Mexico.