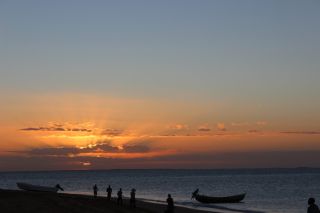 Brendan Fisher is a research scientist for World Wildlife Fund (WWF). This Op-Ed was adapted from a guest blog he wrote for Science Driven. Fisher contributed this article to LiveScience's Expert Voices: Op-Ed & Insights.

My friend Matt has raised an amazing vegetable garden every year since I met him 12 years ago. He knows what he's doing. And yet, despite continued success and the basic facts that given good soil, sunlight and water, a good seed will sprout, he is still in awe every spring when his seedlings first pop up in his planters.

I know what he means. There are basic scientific principles to know and simple rules to follow and voila — production. Still, it is its own small miracle.

I was thinking about Matt while on my way to one of WWF's priority regions in Coastal East Africa — the Primeiras e Segundas in northern Mozambique. I was on my way to a project, in collaboration with the nation's Ministry of Fisheries, collecting first results from WWF's work on farms and in fisheries in the region.

Primeiras e Segundas is a complex land and seascape consisting of sand islands, coastal mangroves, estuaries, dry forests and farmland. It is where humpbacks whales mate on their southern migration down the coast; a critical nesting area for hawksbills, olive ridley sea turtles and green turtles; and a seascape with relatively unexplored reefs.

It is also one of the poorest regions in one of the world's poorest countries. Food insecurity plagues one-third of households — two-thirds for female-headed households. People are reliant on the condition of their farmland and fisheries. And while only about 30 percent of households actively fish, two thirds of households rely on fish protein for nutrition on a daily basis.

More than 80 percent of those fishing households also farm. And there is the shocking statistic that almost 50 percent of coastal, rural Mozambican children suffer from stunted growth.

It was into this complex context that the humanitarian organization CARE and WWF stepped to undertake joint work in 2008 under the CARE-WWF Alliance. The goal was to jointly work on conservation and livelihood issues. Two of the joint interventions with Mozambique communities involved offering training in conservation-agriculture techniques and establishing fish sanctuaries, or 'no-take' fishing zones.

The science sitting underneath these interventions is pretty solid. Research has shown that conservation agriculture — as a suite of techniques including no-tillage, cover crops, and intercropping — improves soil health and moisture retention, which combine to increase yields.

No-take zones in fisheries (when placed in the right spots at the right time) have shown both biodiversity and abundance rebounds for over-fished regions — or as my marine biologist friend says, "fish breed like rabbits." The Mozambique no-take zones are managed by the community fisheries associations and supported by the CARE-WWF Alliance, an increasingly popular and effective solution in such contexts and one of the key, current approaches highlighted in the Rockefeller Foundation's Oceans and Fisheries strategy.

Linking these marine and land-based livelihood interventions is critical in a place experiencing so much pressure on its resource assets.

So why was I nervous about this trip?

Well, for the same reasons my friend is always in awe of his seedlings — so much can go wrong. Drought, pests, a lack of compliance. The list is endless.

But here's the news… it's working.

After two years, the farmer field-schools for conservation agriculture — jointly run by community members — deliver, on average, 50-percent higher soil-stability scores than traditional treatments. Our team is waiting on lab results for soil organics, but stability is a strong indicator of soil health, and hence potential productivity.

Even more exciting is the impact of conservation agriculture on dietary diversity in regional households. Why is this a big deal? Well, because dietary diversity is a strong indicator of many health outcomes — such as poor diversity leading to micronutrient deficiency, the key driver behind childhood stunting.

In our no-take fishing zones in Moma Estuary, we carried out fish surveys with local fishermen. In three years of community-led enforcement, species diversity inside the no-take zones was 45-percent to 93-percent higher than outside.

It's a tribute to the hard work of the communities and the field team. It's also, like those seedlings, a small miracle.

This article was adapted from Farming, Fishing and Small Miracles in Mozambique for the WWF blog Science Driven. The views expressed are those of the author and do not necessarily reflect the views of the publisher. This version of the article was originally published on LiveScience.