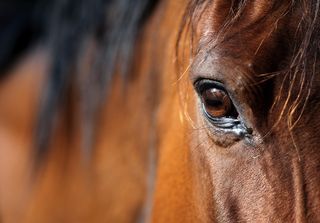 An Arabian bay horse. Most modern horses, with the exception of the truly wild Przewalski's Horse, are either domesticated or feral descendants of once-domestic horses.
(Image: © Alexia Khruscheva, Shutterstock )

In April 2013, "The Ghosts in Our Machine" premiered at the prestigious Hot Docs International Documentary Film Festival, and it was quickly voted a top-ten audience favorite.

The feature-length film, directed by Liz Marshall, has its highly anticipated American release is Nov. 8th in New York City, followed by Los Angeles and other cities to be announced.

An incredible, and forward-looking, film follows internationally renowned photographer Jo-Anne McArthur over the course of a year as she documents the stories of individual nonhuman animals (animals) who are caught in the web of so-called "civilized society" in the United States, Canada and Europe. By doing so, she introduces the audience to the sentient beings who are the "ghosts" in our societal engine and confronts us with the compelling question, "Have you ever wondered how, and why, our species has managed to develop such a sophisticated, well-oiled machine that we call 'modern society'?"

In the film's trailer, where some disturbing images are matched to beautiful prose, McArthur says she feels like a "war photographer," because society is really waging a war against other animals as we wantonly exploit them in myriad ways. McArthur also wonders how and why people so easily leave animals behind and alienate ourselves from these amazing individuals as we go through our days in mindless and heartless ways.

To begin finding some answers to such important and daunting questions, try this simple thought experiment. Take away the billions of animals who suffer on factory farms, those animals who make up the human diet and are called names like "meat," "bacon," "pork" and "sausage" to put distance between ourselves and the sentient beings who they really are. Take away the billions of animals who are used in research, so that people can supposedly live a bit longer and more comfortably. Also take away all of the animals who are forced to jump through hoops and rings of fire in circuses and who are trained or "broken" to perform stupid and unnatural acts solely for people's entertainment. And, don't forget those animal beings who are held captive in zoos and aquaria to satisfy people's curiosity and who gain nothing at all from losing all of their freedoms.

There's more. Take away the animals who are shot, blown up, poisoned and irradiated so that militaries can find more efficient ways to kill other human beings in the wars in which society engages. And, finally, remove the animals whose skin and fur serve humanity's fashion tastes, those beings who we choose to wear when there are numerous and more effective non-animal alternatives.

Now ask, who's left? Note I use the word "who," not "what," because animals are subjects of a life, not mere property or objects, although they are treated as if they are unfeeling items to be used however people choose to use them. Humans really are the most powerful species on earth and we're constantly making decisions about who lives, who dies, and why.

The "Ghosts In Our Machine"invites audience to reflect on the attitudes and norms of a so-called "exceptional contemporary culture" by introducing individual and named animal beings — cows, turkeys, dolphins,  chimpanzees — whose pain, suffering and death are a major part of why our species makes claims of superiority and domination over other animals. The film asks that people consider and change the fact that all sentient nonhuman beings are still considered as owned property under the law.

"The Ghosts In Our Machine"alsoprovokes people to think about a path forward for our species that does not rely upon the exploitation of other animals, but instead compels people to create a compassionate and empathic culture that is truly as advanced and accomplished as we claim it is. The future needs to be a "ghost-free journey" for our species on which we expand our compassion footprint to include all other animals. [When Animals Suffer, the Country Pays a Price (Op-Ed )]

Nonhuman animal beings are not mere ghosts, and society can't continue to build on the backs of these individuals. They are real beings and they are sentient and they care deeply about what happens to them and to their family, their friends and their homes. To claim we still don't know if other animals are conscious beings is to ignore an incredible amount of detailed scientific data and is thoroughly irresponsible.

Beyond my own research, in 2009 I was asked to write on animal emotions for Psychology Today. I have since written some 500 essays on the field of anthrozoology — the study of human-animal relationships — which has grown exponentially.

In my new book, Why Dogs Hump and Bees Get Depressed (New World Library, 2013), I updated many of those essays, more than 100 showcasing the fascinating cognitive abilities of other animals as well as their empathy, compassion, grief, humor, joy and love. Dogs hump for a wide variety of reasons (see this essay) and bees get depressed just like people do. Melissa Bateson of Newcastle University and her colleagues have shown when honeybees are stressed,they display an increased expectation of bad outcomes. In other words, they become pessimists.When similar behavior is observed in vertebrates it's explained as having an emotional basis. The bees also showed altered levels of neurochemicals (dopamine, serotonin and octopamine) that are associated with depression.

We also know that humpback whales protect gray whales from orca attacks; combat dogs and other animals suffer from PTSD; many animals manufacture and use complex tools; and chickens, rats, and mice display empathy.

Living up to society's own standards

We must use the long overdue Cambridge Declaration on Consciousness and the Universal Declaration on Animal Sentience to protect other animals from intentional and unnecessary harm. I frankly don't see how anyone who has worked closely with any of a wide array of animals, or who has lived with companion animals, could remain uncertain and agnostic about whether they are conscious and feeling individuals.

The only path forward is to use what people know about animal sentience to protect animals, so this information must be incorporated into laws and regulations governing how such beings are used. Unfortunately, in the United States, this information has not been used on behalf of animals and billions of individuals continue to suffer and die each year because of this convenient oversight.

The reprehensible and unnecessary torment to which we subject billions upon billions of fascinating animals as we conveniently distance ourselves from them is utterly shameful and not at all flattering to who we humans are. It's also essential that we recognize that we, ourselves, also deeply suffer the indignities to which we subject other animals. We often don't realize that we can experience what's called secondary trauma because of our efforts to relieve the incredible trauma to which we expose other animal beings. This trauma can lead to burnout because of the selfless work in which many animal advocates partake. Animal pain and death hurts us all.

Jo-Anne McArthur believes we really are an innately compassionate species and that when given the opportunity to care, the vast majority of people will do something for other animals. I couldn't agree more. As University of California psychologist Dacher Keltner claims, we are born to be good. Let's harness our innate compassion and empathy to make the world a better and more peaceful home for all beings.

Society needs to mind other animals and work as a unified community to harness our innate goodness, kindness, compassion and empathy to work on behalf of other animals who depend on our goodwill for their very survival. We can do no less. We need to have youngsters take part in this global, peaceful movement because they are ambassadors for the future of our one and only planet. We need to stop ignoring nature and end the widespread and heartless war on other animals now. As we do this, all animals, nonhuman and human, will benefit greatly.

Clearly, our warlike ways haven't worked, so let's give peace, compassion, empathy, and love the chance they deserve. I'm sure we will like what we see as the future unfolds. And, I'm sure other animals will thank us for our efforts. The Ghosts in Our Machine is a very important move in the right direction.

Author's note: I thank Dr. Lori Marino, executive director of the Kimmela Center for Animal Advocacy, for calling my attention to this documentary and for contributing to this essay.

Bekoff's most recent Op-Ed was "Scans Reveal Striking Similarity Between Human and Canine Minds." This article was adapted from "The Ghosts in Our Machine: Award-Winning Documentary in USA" in Psychology Today. The views expressed are those of the author and do not necessarily reflect the views of the publisher. This version of the article was originally published on LiveScience.