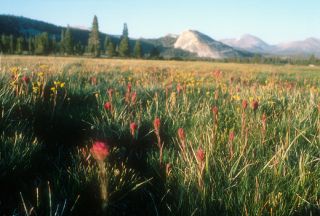 An influx of nitrogen-based pollution is acting as an unwanted fertilizer and is disrupting the ecology of dozens of national parks, according to new research.

Of the 45 U.S. parks the research team studied, 38 were blanketed with high levels of nitrogen-based air pollution from power plants, car exhaust and industrial agriculture, according to the study, which was published in the journal Atmospheric Chemistry and Physics.

The resulting nitrogen overload could disrupt the nutrient cycling in the soil, fuel algal blooms and change water acidity levels in the country's national parks, the research suggests. [Top 10 Most Visited National Parks]

Though about 78 percent of the Earth's atmosphere is made up of nitrogen, most of that nitrogen is bound to itself in a relatively inert form.

However, combustion, power generation and industrial agriculture all add highly reactive forms of nitrogen — either ammonia or nitrogen oxides into the environment. Because those forms can be readily absorbed into the soil and taken up by plants, they can alter plants' growth patterns and disrupt whole ecosystems.

To see how all this nitrogen affected the country's wild places, Raluca Ellis, an atmospheric and applied sciences professor at Harvard University, and colleagues combined data on nitrogen emissions with a continental simulation to describe how the nitrogen would be deposited.

The team found 24 out of 45 parks were well above the critical nitrogen-load threshold that could disrupt ecosystems, and another 14 were just above that threshold. Most of that came from nitrogen oxides in air pollution.

What the future holds

The team then used several predictions of future emissions based on assumptions of technological and socioeconomic changes to see how the situation might change by 2050.

Though nitrogen oxide emissions are expected to fall by between 40 and 85 percent by 2050, overall nitrogen levels won't change much, because ammonia emissions will likely rise by 19 to 50 percent.

"The increase in the U.S. is mainly due to increases in fertilizer use and livestock driven by a growing population and thus higher food demand," the authors wrote in the paper.

By that estimate, 17 to 25 parks will be overloaded with nitrogen by 2050. Even if fuel-based emissions were completely eliminated, 14 national parks will exceed the critical nitrogen levels at that time.

"However, our results suggest that the benefit of these actions will be limited without a parallel plan to decrease [ammonia] emissions," the authors write.