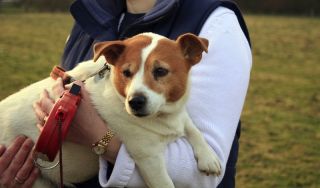 If you want a slim pooch, this is not the way to walk the dog.
(Image: © Lesley Rigg, Shutterstock)

Do you own a portly pooch or a corpulent kitty? Unfortunately, the answer in the United States is all too likely to be yes.

Nearly one in every four dogs and cats in the United States is overweight or obese, according to recent numbers tallied by the Banfield Pet Hospital. The problem is so pervasive that the Association for Pet Obesity has declared today (Oct. 9) National Pet Obesity Awareness Day.

Banfield collects nationwide data on pet health through its 800 animal hospitals spread over 43 states. According to their veterinarian's observations, American pets have a fat problem. Overweight dogs have become 37 percent more prevalent compared with five years ago. For cats, the number is a stunning 90 percent. [Heavy Hounds: A Gallery of Portly Pooches]

Despite the dire numbers, 76 percent of dog owners and 69 percent of cat owners think Fido and Fluffy are just fine the way they are. That’s a problem, according to veterinarians, because extra weight means a higher risk of arthritis, heart disease and respiratory problems ­­­— just as in humans.

A dog or cat at the proper weight should have an obvious waist, with ribs that are easily felt but not seen, according to Banfield. An overweight or obese pet will have too much padding over the ribs for them to be easily felt, an undefined waist, and obvious belly fat. Trouble breathing when active is another sign your pet may be overweight.

Since the upsurge in pet obesity seems to have similar roots to weight gain in humans, some pet weight-loss methods, such as interactive weight-monitoring tools and exercise equipment, have been modeled after humans weight-loss programs.