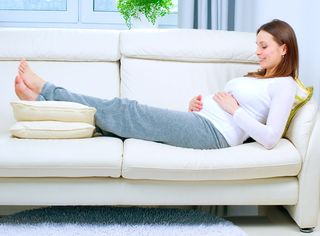 Many pregnant women develop swelling in the feet and ankles.
(Image: © Pregnancy photo via Shutterstock)

Planning to give birth to twins by vaginal delivery is as safe for a mother and her babies as planning to have a cesarean section, a new study suggests.

Canadian researchers found that women who had a planned C-section to deliver twins did not lower their risk of a baby dying or having a serious medical complication, compared with women who were slated to have a vaginal birth.

"The study shows that women who are pregnant with twins can achieve the same results for their babies by planning a vaginal birth compared with planning a cesarean section, as long as they have obstetricians who are competent, skilled and safe," said study author Dr. Jon Barrett, chief of maternal and fetal medicine at Sunnybrook Health Sciences Centre in Toronto.

Despite a lack of strong evidence that delivering twins via C-section is better for mother and baby when the pregnancy was at or near full term, many women have elected this birthing method. [9 Conditions That Pregnancy May Bring]

C-section rates for twins are rising at a time when twin births are also increasing — the last three decades have seen a more than 70 percent spike in twin births in the United States, according to the Centers for Disease Control and Prevention. This is due in part to a growing number of older women giving birth, as well as the use of in vitro fertilization and other assisted reproductive technologies.

Even so, the new results did not show that mothers improved their health outcomes with a planned C-section, instead showing that for the nearly 5,600 twins in the study, neither delivery method offered a real advantage over the other.

"This is the first study giving us reliable, unbiased evidence about the planned birth of twins," Barrett told LiveScience. That's because it was the first large, randomized controlled trial of twins to look at birth outcomes of mothers and babies from an international perspective, he said.

The study is published online today (Oct. 2) in the New England Journal of Medicine.

In the study, researchers gathered data for about seven-and-a-half years from women in 25 countries, who delivered their babies at 106 medical centers around the globe, from Argentina and Egypt to Serbia and the United States.

The analysis included only women who gave birth to twins between their 32nd and 38th weeks of pregnancy, and for which the first twin was in a good position — head down — for a vaginal delivery.

The study was designed to look at the question of whether planning to do a vaginal birth was as safe as planning to do a C-section, but the researchers also considered what actually happened during the births. Almost 40 percent of women in the planned vaginal delivery group ultimately needed a C-section, and about 10 percent of the women in the planned cesarean group had one or both of their twins vaginally.

"Even with [single births], about one-third of women who plan to have a vaginal birth end up delivering by cesarean," Barrett said. So it came as no surprise to him that doctors involved in the research felt the need to change the delivery method.

Barrett said that he hoped the study shows women who are pregnant with twins — who may have thought or been taught that C-sections are safer — that they have more choice in their delivery methods.

He said the results may also serve as a wake-up call for obstetricians to invest the time, energy and expertise in preserving the skills needed to help women to have safe vaginal births with twins.

"This study does provide fairly substantial evidence that the strategy to deliver twins vaginally is just as safe for mother and baby as the strategy to deliver by C-section," said Dr. Michael Greene, director of obstetrics at Massachusetts General Hospital in Boston, who wrote an editorial accompanying the research in the journal.

"This is a unique study," Greene said, adding that no study of this magnitude (in terms of the number of births, length and international scope) has been done before.

Virtually all of the previous data on birth methods for twins has come from observational studies, Greene said.

"This is the first really huge effort to compare birth outcomes from a randomized clinical trial, the strongest type of scientific evidence," he said.

The bottom line, Greene said, is that vaginal delivery is a reasonable and safe choice for many mothers of twins, a finding that may reassure pregnant women and their obstetricians to consider this birth method.