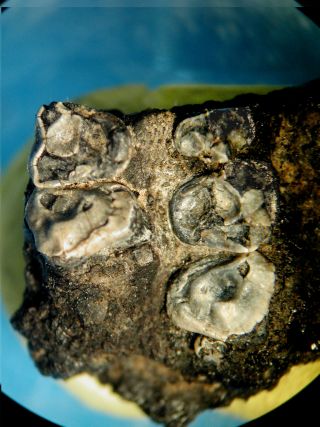 The fossilized jaw of a pint-size primate that lived about 35 million years ago in Asia has been unearthed in Thai coal mines.

The new species, dubbed Krabia minuta, after the Krabi coal mines where it was found, was an ancient, extinct member of a group of primates called anthropoids, which includes the ancestors to all monkeys and apes, including humans. Even so, the creature showed peculiar features, including its distinct molars, not seen in other members of this primate group.

The tiny primate emerged during a mysterious period when primates somehow moved across a vast sea from Asia to Africa. [See Images of the Pint-Sized Primate Fossils]

"The Asian anthropoids were probably more diversified than what we know today and also probably played a more important role in the origin of the modern crown anthropoids than we suspected," said study co-author Jean-Jacques Jaeger, a paleontologist at the Université de Poitiers in France.

Though humans came from Africa, anthropoids, precursors to monkeys and humans, likely emerged from Asia. Fossil anthropoids have been found in China dating to 45 million years ago and in Southeast Asia as far back as 40 million years, yet similar species only appear in Libya in Africa around 38 million years ago.

Scientists have been perplexed by how these ancient simians made it out of Asia to Africa — an impressive journey considering that, at the time, Africa was separated from Asia by the Tethys Sea, which was bigger than the Mediterranean Sea, said Christopher Beard, a vertebrate paleontologist at the Carnegie Museum of Natural History in Pittsburgh, who was not involved in the study.

One hypothesis is that ferocious cyclones ripped out whole chunks of land and trees in Asia — complete with primates and rodents clinging to the branches — and set those mini-islands adrift at sea. Those islands eventually floated to Africa, and the few tree-dwellers that survived then colonized the new continent, Beard said.

Yet Asian fossils that could help test this hypothesis have been hard to come by.

"The problem for paleontologists is that when you've got so much foliage everywhere, like a jungle, it's almost impossible to find fossils," because the foliage covers up earth where the fossils would be exposed, Beard told LiveScience.

Jaeger and his colleagues excavated in the Krabi coal mine in Thailand, where the earth was already exposed. Paleontologists have discovered a trove of fossils from the area, including a 20-lb. (9 kilograms) anthropoid known as Siamopithecus.

The team unearthed part of a jaw and teeth from a tiny creature that likely weighed just half a pound. Based on the tooth geometry, the creature was definitely an anthropoid, though one very different from any other kinds previously known.

"The molar teeth of Krabia are very peculiar and indicate a diversified food made of soft fruits and or gum. This diet is very different from the other known southeast Asian anthropoids," who ate either insects or hard foods such as nuts, Jaeger said.

The team hypothesizes that the little simian is a (albeit odd) member of a group called amphipithecids, an extinct group of anthropoids that lived in Southeast Asia.

But because so little of the creature's body was preserved, Beard isn't certain of that classification.

"Reasonable people could disagree about what this fossil is and where it fits on the family tree of primates," Beard said.

That doesn't detract from the fossil's significance.

"It's one of a very few number of fossils that have come from there, and we have reason to think that Southeast Asia was a real epicenter for primate evolution at that time," Beard said.

The findings were detailed today (Oct. 1) in the journal Proceedings of the Royal Society B.