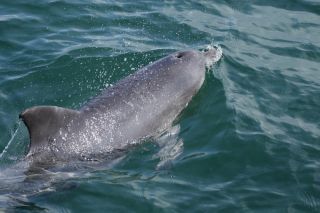 I just learned to my great surprise that my book "The Smile of a Dolphin: Remarkable Accounts of Animal Emotions" (Discovery Books, 2000) is now banned in Texas in certain libraries and the class reading lists of certain schools. It's No. 6 on the current list, joining such books as "Paintings from the Cave," "Talking in the Dark," and "World War Z."

When the book project began, my editors at Discovery Books and I were very surprised when all but two people accepted our invitation to contribute (one potential author said "No" because she thought the book would be "too loose" and one declined because he was out of the country). The response was a surprise because, at the time, writing about animal emotions with passion and heart was still pretty much taboo for academics.

While the book was in preparation, many others asked to be included, but because of space limitations, that wasn't possible. Each story is accompanied by magnificent photographs — including the potentially controversial one of a whale's penis on page 65, in an essay by award-winning researcher and writer Bernd Würsig. There are also pictures of animals who clearly love one another and those who don’t.

When the book was published in 2000, it was unique precisely because most scientists back then didn't "let their hair down" to share the emotional lives of the animals they studied. Some have said the book legitimized the scientific study of animal emotions and showed that many scientists were eagerly looking for an outlet for the wonderful stories they had without having to write a book of their own — as professional journals wouldn't accept such essays.

Indeed, many of the stories were supported by a substantial research database. The essays also showed that the writers deeply cared about the animals with whom they spent a good deal of time.

In addition to the stories, the foreword for the book was written by the well-respected, late scientist Stephen Jay Gould — and takes a strongly evolutionary perspective on the emotional lives of animals. I remember well talking with Stephen about writing the foreword and he was really excited to do it. He was also a baseball fanatic and told me we'd have to continue our discussion because he was late for a baseball game, which made me laugh.

"The Smile of a Dolphin" remains a popular book, apparently popular enough for it to be banned in Texas. I think their ban is an interesting and rather unanticipated move, and a few people have asked me why I think this was done. The ban does indeed reflect on humanity's relationships with other animals, and the best answer I can come up with is that it is due to the presence of evolutionary arguments about animal emotions and some essays on sexual behavior and aggression.

The major reason books are banned in the Lone Star state is that they contain sex, profanity, violence, religion, race or politics. My book is guilty of two of these charges — sex and violence. I also think it's the evolutionary arguments that didn't sit well with people who don't believe in well-accepted evolutionary theory.

I'm not aware of any other books of this type being banned anywhere and my online essays have been very well received. I think there's much food for thought concerning the ban for anthrozoologists who are interested in human-animal relationships. However, there's also a lot of food for thought here about the freedom for someone to read whatever she or he wants to read.

As of now, not a single person who has written to me is even slightly surprised about the ban, and some think I should be honored and flattered. (Given the ban on my book, I'm also surprised to learn that one of my favorite singers, Kinky Friedman still rocks and rolls in his home state of Texas.)

I don't plan to do anything about the ban because I don't see what protesting can possibly do with anyone who thinks the book violates some perverse moral code — and because I really don't have the time. I can only imagine how my forthcoming book, "Why Dogs Hump and Bees Get Depressed: The Fascinating Science of Animal Intelligence, Emotions, Friendship, and Conservation" (New World Library, 2013) will be received in the great state of Texas.

Bekoff's most recent Op-Ed was "Do Animals Know Who they Are?" This article was adapted from "Animal Emotions Book Banned in Texas" in Psychology Today. More of the author's essays are available in the subject of today's Op-Ed, "The Smile of a Dolphin: Remarkable Accounts of Animal Emotions," and"Why Dogs Hump and Bees Get Depressed." The views expressed are those of the author and do not necessarily reflect the views of the publisher. This version of the article was originally published on LiveScience.