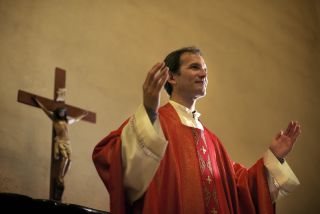 The Roman Catholic Church bars most married men from becoming priests, but that rule, could, in theory, be changed.

Priestly celibacy is rooted in tradition, not Catholic dogma, so the pope could change it overnight.

So far, Pope Francis has given little indication that priestly celibacy is on the chopping block. However, Archbishop Pietro Parolin, the Vatican's new secretary of state and Pope Francis' No. 2 man, has said the issue is open for discussion, though still a firmly rooted Catholic tradition. [Papal Primer: History's 10 Most Intriguing Popes]

Those who are happy with the current rules say priestly celibacy allows priests time and energy to focus completely on their flock and to emulate Jesus, who was unmarried, more faithfully. But those who would like to see married priesthood argue celibacy is so difficult for many men that it dissuades people from the priesthood and can lead to sexually immature people pastoring their flocks.

Married to the church

The roots of celibacy requirements go back to Jesus Christ: According to the Bible, he was an unmarried virgin. In the Bible, Jesus is often likened to a bridegroom whose bride is the Church.

Many of the early martyrs and church fathers emulated his life of chastity.

The first head of the Catholic Church (effectively the first pope), Peter, was married, as were many of the other apostles during Jesus' time. But in the New Testament, marriage was seen as a holy option for those who would otherwise have trouble controlling their sexual urges. [7 Quite Unholy Pope Scandals]

"What you find right at the beginning of the church is that, on the one hand, marriage is seen as a good and virginity is seen as a higher good," said Mark Shea, a Catholic blogger and the author of "Making Senses Out of Scripture: Reading the Bible as the First Christians Did" (Basilica Press, 1999).

But by the Middle Ages, many priests treated their calling as a "family business," giving preference to their sons for plum positions and trying to edge out the competition to protect their legacy. Because of this practice, the Church formally banned the practice of priests marrying about 1,000 years ago, Shea said.

From a spiritual perspective, priests are called to act as another Christ, which includes his celibate lifestyle.

(There are still a few married Catholic priests: Episcopal and Lutheran priests who were married and then converted to Roman Catholicism can be ordained, and men in the Eastern Rites, such as the Ukrainian Church, can marry before becoming ordained.)

Some critics say that mandatory priestly celibacy should go.

"In the Catholic church, we have 2,000 years' history of its impossibility for many people," said A.W. Richard Sipe, a sociologist and former Benedictine monk who has been married for 43 years. "Lots of people just can't do it."

There are other problems with barring priests from marriage, Sipe said.

"The Catholic priesthood, in a sense, fosters a psychosexual immaturity by imposing celibacy," Sipe told LiveScience.

That could make it hard for priests to offer wise and mature counsel on those issues to their parishioners, he said.

Other research has suggested that more men would be interested in priesthood if celibacy became optional. With a shortage of priests looming, many tout eliminating the celibacy requirement as a possible solution.

However, Shea is skeptical.

Mainline Protestants, whose preachers and ministers are allowed to marry, are also seeing their number of clergy plummeting, he said.

"People who are attracted to vocations are typically drawn because they want to serve Jesus," Shea said. "I don't think eliminating the celibacy requirement in the Latin Rite is really going to change that much."

Unlike the rule barring women from priesthood, priestly celibacy is considered a tradition, not official Church dogma. In theory, the pope could change the rule overnight.

But that would raise practical issues. Currently, priests are paid through the donations people offer to the church.

If priests are married, "you're going to have kids, health care expenses, and you have to pay for school — [kindergarten] through college," Shea told LiveScience. "If we're willing to do that, I'm fine with that."

In addition, priests often serve thousands of parishioners, and are the only ones who can offer the sacrament of mass, where the wafer and wine are thought to become the body and blood of Christ. Having a family could take away the time and energy priests now focus on the spiritual needs of their flock, Shea said.

Other Christian denominations have had 500 years to work out how to support marriage and spiritual work, but the Catholic Church would need to do all that work from the ground up, Shea said.