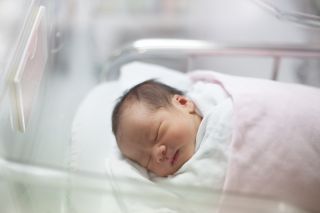 Sometimes just holding a cute newborn will make a person say, "I want to eat you up!" New research shows that for women, there might be a biological mechanism behind that expression.

The smell of a newborn baby triggers a surge of dopamine for new moms similar to the reward response that comes with satisfying a craving for food, the study researchers found.

Smells are part of a network of chemical communication signals between mother and child and they can be intense, said study author Johannes Frasnelli, a postdoctoral researcher and lecturer at the University of Montreal. [7 Ways Pregnant Women Affect Babies]

"What we have shown for the first time is that the odor of newborns, which is part of these signals, activates the neurological reward circuit in mothers," Frasnelli said in a statement. "These circuits may especially be activated when you eat while being very hungry, but also in a craving addict receiving his drug. It is in fact the sating of desire."

Frasnelli and colleagues recruited two groups of women: 15 without any kids and 15 first-time moms who had given birth three to six weeks before the experiment. (The study did not include men.)

Using functional magnetic resonance imaging (fMRI), the researchers measured the participants' brain activity as they sniffed through an olfactometer, a device that's held up to the nose to detect smells. The researchers fed the olfactometer with the odor of different infants, collected in the form of cotton undershirts worn by 18 newborns.

The women were not told what they were smelling in the experiment, and they were asked to rate how pleasant, intense and familiar each odor was.

Overall, the women in both groups rated the baby odors as weak, unfamiliar and mildly pleasant. But the moms generally had greater activity in a part of their brain linked to reward, the researchers said.

The brain scans of new moms showed heightened activity in the dopamine pathway of the caudate nucleus — a region near the center of the brain that plays a role in reward learning, the researchers said. (Dopamine is brain chemical that is linked to pleasure as well as motivation and reward.)

The researchers aren't sure if new moms undergo a hormonal change that leads to this surge of dopamine or if their reaction is influenced by the experience of smelling their own baby, the researchers say.

"It is possible that childbirth causes hormonal changes that alter the reward circuit in the caudate nucleus, but it is also possible that experience plays a role," Frasnelli said in a statement. And it's not clear if the reaction is specific to women since men were not included in the study.

The findings were detailed online this month in the journal Frontiers in Psychology.

Past research has suggested that responses to cuteness in general — wanting to "eat up" a baby or squeeze a kitten — are actually forms of aggression. The researchers of that study suggested the aggression was due to an overload of positive emotions that led to a sense of lost control.