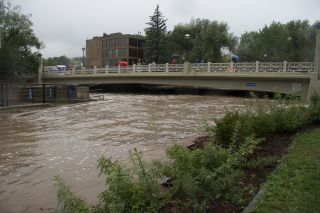 The torrential rains and walls of water that rushed through stream channels caught many Coloradoans by surprise this week, but disaster scenarios have long foretold the fatal flash floods that tore through Colorado's foothills yesterday and today (Sept. 13).

"We knew this kind of rain was possible," said Matt Klesch, a hydrometeorologist at the University Corporation for Academic Research (UCAR), based in Boulder, Colo. This week, Boulder set a record for its wettest 24-hour period, with 7.21 inches (18.3 centimeters) of rain from 6 p.m. Wednesday (Sept. 11) to Thursday, and more than 12 inches (30 cm) in total from Monday to Friday.

In 2004, the University of Colorado's Natural Hazards Center listed a flash flood in Boulder as one of six "disasters waiting to happen" in the United States. But scientists and emergency officials have been preparing for this week's flooding since 1976, when a flash flood killed 145 people in Boulder's Big Thompson Canyon. [Colorado Flood Photos: 100-Year Storm]

"Prior to that, we weren't really prepared," Klesch told LiveScience. "Big Thompson Canyon was a wake-up moment."

Preparing for the flood

After the 1976 flood, the city of Boulder bought up undeveloped land along flood zones to prevent development, said Dennis Mileti, the director emeritus of the University's Natural Hazards Center. The city built bike paths to serve double-duty as floodwater channels, with breakaway fences so debris wouldn't jam.

"Boulder is one of the most progressive communities [in the United States] in terms of making reasonable decisions about how to develop and to not develop the flood plain," Mileti told LiveScience.

On the other hand, Boulder's high school, hospital and library — built before 1976 — still sit in the flood plain, Mileti said. In a worst-case scenario, officials would have to evacuate those sites with only a couple hours notice. "The real threat is when a wall of water 40-feet [12 meters] high comes barreling down the mountain canyons at 40 miles an hour [64 km/h] on a beautiful, sunny day," he said. "That hasn't happened yet."

The Rocky Mountains have long been prone to flash floods. Native Americans warned Boulder's founders of flooding, according to historical accounts. The U.S. Geological Survey has mapped the remnants of ancient flash floods all along the Colorado Front Range, where steep mountain canyons send debris pouring into town, along with the rocks that give Boulder its name.

The last 100-year flood in Boulder was in 1894, so the city was statistically overdue for another disaster. (Note that even though a 100-year flood appears on average once a century, it's possible for two 100-year events to hit in back-to-back years; the term actually refers to the 1 percent chance of the event happening in any given year.)

But the flood that Coloradoans remember struck on July 31, 1976. A storm dumped more than 8 inches (20 cm) of rain in one hour, laying waste to Big Thompson Canyon and trapping hundreds of residents and campers in the steep, narrow gorge.

This week, officials closed Highway 34 in Big Thompson Canyon before the worst flooding hit. The road was soon washed out. Sirens and text alerts warned Boulder residents of the coming flood. At the University of Colorado, police evacuated students from married-family housing, one of the most vulnerable buildings on campus. People living in remote areas received personal warnings by phone from their local emergency officials, according to news reports.

But despite all the advance planning, three people died, two of them as they were leaving a car stopped in floodwaters, the Denver Post reported. But emergency rescuers also saved a man whose car fell into raging Boulder Creek when a road collapsed.

For the past two decades, Boulder County fire crews have trained to save residents trapped in floodwaters. They bumped up the crews' biennial practice schedule in 2011 after a massive forest fire that raised fears of increased runoff.