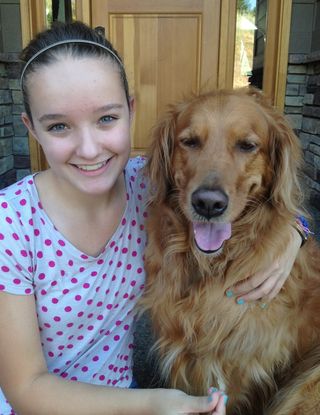 Brooke Martin, 13, was inspired by her dog Kayla (both shown here) to invent iCUPpooch, a device that allows video chat and treat dispensing remotely to keep separation anxiety at bay.
(Image: © Courtesy of Brooke Martin)

Brooke Martin's golden retriever Kayla hated being left alone, and Martin, now 13, wanted to help her. She wondered: "What if you could talk to your dog if you were gone?" and "What if you were able to give them a treat while you were away?"

Then the answer came to her: video chat and dog treats dispensed remotely.

Her invention, called iCUpooch, has earned her a spot competing against nine other finalists in a young scientist competition for middle-school students. These finalists, selected based on their short video presentations, are collaborating with mentors over the summer before heading to the final competition in St. Paul, Minn. [Fun Middle-School Science Fair Projects]

Even before hearing about the competition, Martin knew what she wanted to do, and had been working on prototypes in the garage of her Spokane, Wash., home.

"I have always been an entrepreneur at heart," she said.

After Martin's video put her among the 10 finalists in the Discovery Education 3M Young Scientist Challenge, she was paired with Delony Langer-Anderson, a product development scientist in 3M's consumer health care division.

The two communicate by phone and email. "I just lead her down the product development path," Langer-Anderson told LiveScience. This path includes guidance on how to test the potential product, which combines a video chat device that answers automatically on the dog's end with a dog treat dispenser the owner can remotely activate.

"One thing I have thought about a lot is, what happens if while the device is on the floor, what if your dog knocks it over, or scratches the screen?" Martin said. She and Langer-Anderson discussed this, and Martin is now testing materials at a local dog shelter by taping them to the kennel floors to see how well they withstand canine claws.

Like Martin's invention, the other students' projects propose possible solutions to everyday problems. The finalists create prototypes they can test, with the guidance from a mentor. Other projects include a fuel cellthat converts cut grass into electricity and an app that rewards drivers for not texting or calling.

Langer-Anderson tries to help the students work through the scientific method, testing their hypothesis, in an affirming way, "so the kids don't get buried in data," she said. But that doesn't mean guaranteed success.

"I try to encourage my students I mentor that sometimes it is just as good to learn what doesn't work, and they should all experience that at some point," Langer-Anderson said.

Martin, who starts ninth grade this year, has yet to test her device on dogs other than her own: Kayla and, now, Zoey. Both of them respond well to it, but Kayla no longer suffers from separation anxiety, thanks to Zoey's presence, Martin said.

"This idea could be a cheaper solution to getting another dog," Martin said. She has started a Kickstarter campaign to fund work on iCUpooch.

The winner of October's competition is expected to receive $25,000, a trip from Discovery Student Adventures and the title "America's Top Young Scientist."