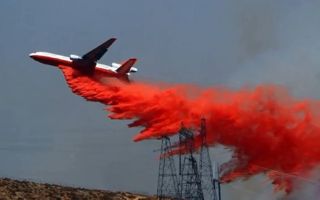 When confronted with a raging wildfire — such as the Rim Fire now threatening California's Yosemite Valley — the U.S Forest Service has several weapons in its firefighting arsenal, including ground crews who create firebreaks and aircraft that dump water and flame retardants.

But the use of flame retardants has come under increased scrutiny in recent years: While some question the cost-effectiveness of using the substances, environmental groups are concerned that the bright red chemical slurry can have a deadly effect on plants and wildlife.

There's no hard evidence that flame retardants actually increase a firefighting crew's initial success in containing a fire, limiting its spread or lowering the number of homes lost, Stahl explained. "None of these are improved by the use of fire retardant," Stahl said.

These compounds are also used in agricultural fertilizers. That, according to several researchers, is precisely the problem: When dumped into a wilderness area, these fertilizers stimulate the growth of certain weedy, fast-growing plants that outcompete slower-growing plant species, some of which are rare or endangered.

Additionally, if these compounds find their way into a stream or lake, the fertilizers can kill off fish and other aquatic species, causing a harmful algal bloom. These events reduce the amount of oxygen in a body of water and encourage the growth of toxic algae.

In 2002, a plane inadvertently dumped thousands of gallons of fire retardant into the Fall River in Oregon, causing the immediate death of roughly 21,000 trout, whitefish and other species, according to the Associated Press. It took two years for the area's fish population to recover. And in 2009, fire retardant dropped near the Santa Ynez River in California killed about 50 protected steelhead trout.

These environmental problems have been addressed by changes to the compounds used in the fire retardant slurry mixture, the AP reports, and despite the FSEEE's contention that flame retardant is of limited effectiveness, the Forest Service maintains that the chemicals are essential to controlling blazes. "When enough people in enough places say retardant helps, we have to believe they're not making it up," Cecilia Johnson, an agency fire chemicals technical specialist, told the AP.

The Forest Service and groups like the FSEEE (which is largely made up of current and former Forest Service employees) won't likely resolve their ongoing feud anytime soon. Stahl's group has filed a number of lawsuits against the Forest Service, and these suits have resulted in some significant changes in the way the agency fights fires.

For example, to minimize impacts on aquatic life, the Forest Service has agreed to limit the use of flame retardant in areas within 300 feet of streams and lakes; the agency has also issued maps showing "retardant-specific avoidance areas" for each national forest.

"The forest service has committed to not dump retardant in those areas unless somebody's life is in danger," Stahl said. Whether that will actually happen in the midst of a raging inferno, however, is unclear, he said.