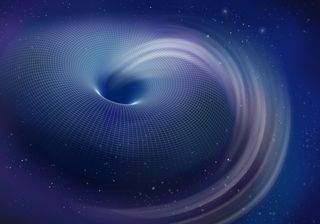 Though wormholes have never been proven to exist, these theoretical passageways through space-time are predicted by Einstein's general theory of relativity.
(Image: © lgartist 79 | Shutterstock)

The concept of a time machine typically conjures up images of an implausible plot device used in a few too many science-fiction storylines. But according to Albert Einstein's general theory of relativity, which explains how gravity operates in the universe, real-life time travel isn't just a vague fantasy.

Traveling forward in time is an uncontroversial possibility, according to Einstein's theory. In fact, physicists have been able to send tiny particles called muons, which are similar to electrons, forward in time by manipulating the gravity around them. That's not to say the technology for sending humans 100 years into the future will be available anytime soon, though.

Time travel to the past, however, is even less understood. Still, astrophysicist Eric W. Davis, of the EarthTech International Institute for Advanced Studies at Austin, argues that it's possible. All you need, he says, is a wormhole, which is a theoretical passageway through space-time that is predicted by relativity. [Wacky Physics: The Coolest Little Particles in Nature]

"You can go into the future or into the past using traversable wormholes," Davis told LiveScience.

Wormholes have never been proven to exist, and if they are ever found, they are likely to be so tiny that a person couldn't fit inside, never mind a spaceship.

Even so, Davis' paper, published in July in the American Institute of Aeronautics and Astronautics' journal, addresses time machines and the possibility that a wormhole could become, or be used as, a means for traveling backward in time.

Both general-relativity theory and quantum theory appear to offer several possibilities for traveling along what physicists call a "closed, timelike curve," or a path that cuts through time and space — essentially, a time machine.

In fact, Davis said, scientists' current understanding of the laws of physics "are infested with time machines whereby there are numerous space-time geometry solutions that exhibit time travel and/or have the properties of time machines."

A wormhole would allow a ship, for instance, to travel from one point to another faster than the speed of light — sort of. That's because the ship would arrive at its destination sooner than a beam of light would, by taking a shortcut through space-time via the wormhole. That way, the vehicle doesn't actually break the rule of the so-called universal speed limit — the speed of light — because the ship never actually travels at a speed faster than light. [Warped Physics: 10 Effects of Traveling Faster Than Light]

Theoretically, a wormhole could be used to cut not just through space, but through time as well.

"Time machines are unavoidable in our physical dimensional space-time," David wrote in his paper. "Traversable wormholes imply time machines, and [the prediction of wormholes] spawned a number of follow-on research efforts on time machines."

That's because once a wormhole is created, one or both ends of it would need to be accelerated through time to the desired position, according to general relativity theory.

There are several theories for how the laws of physics might work to prevent time travel through wormholes.

"Not only do we assume [time travel into the past] will not be possible in our lifetime, but we assume that the laws of physics, when fully understood, will rule it out entirely," said Robert Owen, an astrophysicist at Oberlin College in Ohio who specializes in black holes and gravitation theory.

According to scientists' current understanding, keeping a wormhole stable enough to traverse requires large amounts of exotic matter, a substance that is still very poorly understood.

However, exotic matter has only been observed in very small amounts — not nearly enough to hold open a wormhole. Physicists would have to find a way to generate and harness large amounts of exotic matter if they hope to achieve this quasi-faster-than-light travel and, by extension, time travel.

Furthermore, other physicists have used quantum mechanics to posit that trying to travel through a wormhole would create something called a quantum back reaction.

In a quantum back reaction, the act of turning a wormhole into a time machine would cause a massive buildup of energy, ultimately destroying the wormhole just before it could be used as a time machine.

However, the mathematical model used to calculate quantum back reaction only takes into account one dimension of space-time.

"I am confident that, since [general relativity] theory has not failed yet, that its predictions for time machines, warp drives and wormholes remain valid and testable, regardless of what quantum theory has to say about those subjects," Davis added.

This illustrates one of the key problems in theories of time travel: physicists have to ground their arguments in either general relativity or quantum theory, both of which are incomplete and unable to encompass the entirety of our complex, mysterious universe.

Before they can figure out time travel, physicists need to find a way to reconcile general relativity and quantum theory into a quantum theory of gravity. That theory will then serve as the basis for further study of time travel.

Therefore, Owen argues that it's impossible to be certain of whether time travel is possible yet. "The wormhole-based time-machine idea takes into account general relativity, but it leaves out quantum mechanics," Owen added. "But including quantum mechanics in the calculations seems to show us that the time machine couldn't actually work the way we hope."

Davis, however, believes scientists have discovered all they can about time machines from theory alone, and calls on physicists to focus first on faster-than-light travel.

"Until someone makes a wormhole or a warp drive, there's no use getting hyped up about a time machine," Davis told LiveScience.

Accomplishing this will require a universally accepted quantum gravity theory — an immense challenge — so don't go booking those time-travel plans just yet.