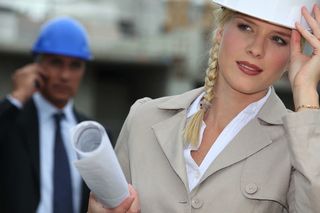 The biggest wage gap between men and women in engineering fields occurs in mid-career, a survey showed.
(Image: © auremar | shutterstock)

Women who work in engineering or optics earn less than men, and the wage gap peaks mid-career, a new survey finds.

Median salaries for men in these fields were 36 percent higher overall than for women. The median salary for men was $79,755, compared with $58,431 for women. Men and women had the largest salary difference in Middle Eastern countries.

The findings were detailed in the International Society for Optics and Photonics (SPIE) 2013 global salary report.

Male survey respondents also reported working longer hours than women. Between 25 and 30 percent of the men said they work 50 hours or more per week, compared with about 20 percent of women. But the number of hours worked is just one of many factors that might explain the difference in pay mid-career, the report's authors noted.

Men made up 83 percent of the survey sample. SPIE sent survey invitations to its global customer database in April. The survey yielded a total of 6,752 valid responses.