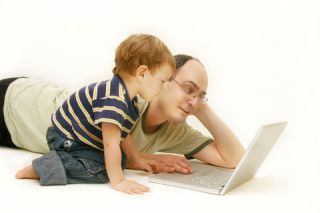 BlackBerry in hand and baby in tow, dads don't have much down time these days. Now, a new study reveals many Danish men are clocking up to 40 hours of overtime at work each week.

Obviously, work is organized somewhat differently in many European countries, but the Danish study could apply to the United States, where longer work hours are becoming the norm as well, say the researchers.

For instance, while nearly 9 percent of U.S. employees reported working more than 50 hours a week in 1983, more than 12 percent indicated the same in 2002. Among all workers surveyed in 2002, more than 17 percent of men overworked compared with nearly 7 percent of women. (The data come from the Current Population Survey, which is a monthly survey of about 50,000 households conducted by the U.S. Census Bureau for the Bureau of Labor Statistics.)

With more hours at the office, men have less time for household chores and other family-focused activities, the researchers say.

"This clearly does not ease the situation for women and men who want to combine career and family-life," said lead researcher Patricia van Echtelt of The Netherlands Institute for Social Research. "Moreover, a growing body of literature shows that working long hours does not automatically lead to greater productivity and effectiveness, and thus not necessarily contributes to employers' needs but potentially harms the well-being of employees."

(In fact, work and money have been reported as leading causes of stress, with job stress linked with all kinds of health problems from diabetes to heart disease.)

The new findings are based on a survey of the working habits of more than 1,000 male and female employees. Overtime was defined as the hours that exceeded a person's contractual hours.

The researchers found 69 percent of men worked overtime compared with 42 percent of women. And women who work overtime spend on average about five additional hours at work compared with men's seven extra hours.

Van Echtelt and colleagues say the gender gap is partly due to the continuing trend for women to be more involved in unpaid family work. "Even when partners share family work, men often characterize their contribution as 'helping' their wives, without feeling they have the main responsibility," they write in the April issue of the journal Gender and Society.

Still, men are getting more involved these days with the nitty-gritty of parenting. A 2007 Pew Research Centers Social Trends Survey found that women reported husbands are doing a great job as dads.