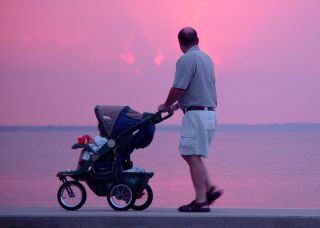 Many fathers these days are well acquainted with carpooling kids to after-school sports, changing diapers and other stereotypically “mom” duties. But the do-it-all dad is not happy with his performance, and he lags behind mom and even the household pet in terms of closeness to the kids. He's lucky if he even gets a card on Father's Day, statistics show.

For respect, the modern family guy has to turn to his wife.

A recent survey finds that while it’s tougher being a dad today than it was a generation ago, most moms give them gold stars for their domestic work.

The researchers suggest the rise in dual-income families provides much of the push to get dads onboard in family matters. “Dads used to just have to go to work, come home, dinner was on the table,” said researcher Kim Parker of the Pew Research Center for the People and the Press in Washington, D.C. “They didn’t have to get as involved in the nitty-gritty of parenting as they do now; that’s my instinct.”

The results are based on the Pew Research Center’s Social Trends Survey conducted between February and March of this year, which included more than 2,000 telephone interviews with a nationally-representative group of U.S. adults ages 18 and older.

About 60 percent said fathers have it tougher now than they did 20 or 30 years ago.

Dads’ biggest fans are working moms. More than 70 percent of married women who work at least part-time and raise young children said fathers are doing as good a job or better at childrearing compared with a generation ago.

Men are their own harshest critics, with 55 percent of those surveyed believing they are doing a worse job parenting today than in the past.

Domestic dads have yet to edge out their wives when it comes to “motherly love.” In a 2005 Pew survey, twice as many respondents reported they would turn to their mothers in times of crises as opposed to their fathers. Nearly 90 percent reported close ties with their mothers compared with less than 75 percent reporting the same for dads.

The sentiment (or lack thereof) could be reflected in kid turnout on parent’s special days. While Mother’s Day is the second most popular holiday for gift-giving (following Christmas) and the third-largest card-sending holiday, Father’s Day ranks fourth on the card-sending list, according to Hallmark research and the National Retail Federation.

Pets outrank dads, too. On average, pet owners gave higher relationship ratings to their cats and dogs compared with those given to fathers. Men may not care much, though, because they don’t base their personal wellbeing on bonds with their kids.

Men generally say the most important aspect of their personal happiness involves their relationships with their wives, not with their kids. The opposite is true for women, who place more stock in mom-child ties than husband-wife relationships.