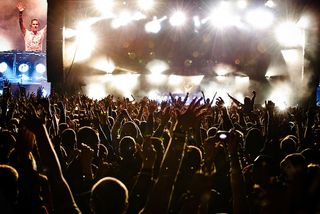 Party-goers dance into the night.
(Image: © Party photo via Shutterstock)

When an unusually high number of people with serious eye injuries showed up at an emergency department one morning, health officials started an investigation to find out what had gone wrong the night before at the Florida nightclub that the injured people all reported visiting.

After checking with the neighboring hospitals, researchers found and examined 56 people who had developed eye problems after attending the club's "foam party" (in which blowers on the ceiling spray soapy foam down onto a dancing crowd) with about 300 other attendees in Naples, Fla., according to the report published today (Aug. 22) by the Centers for Disease Control and Prevention (CDC).

As a result of the party, held in May 2012, about 80 percent of those with injuries had reduced vision and inflammation of the eye, or conjunctivitis. Half of patients had abrasions of the cornea, meaning the clear tissue covering the eye was scratched or cut.

Almost all patients reported severe pain in the eyes, eye irritation and redness. Eleven patients could not open an eye, or read the first letter of the vision chart. [9 Oddest Medical Cases]

All patients reported getting foam in their face, and said they rubbed their eyes after exposure to the foam.

The incident "highlights the range and potential seriousness of eye injuries that can result from exposure to foam," the researchers said.

People had eye problems for seven days on average, but for seven patients, the symptoms had not completely resolved more than one month after the injury, the researchers said.