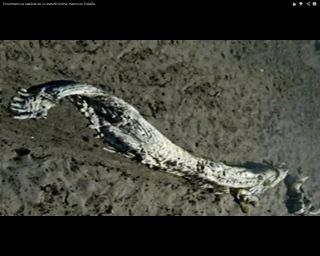 The decomposed remains of a large sea creature washed up on a Spanish beach, sparking wild speculation about a "sea monster."
(Image: © YouTube screengrab)

The bizarre-looking body of an unidentified sea creature washed up on the shores of a Spanish beach last week, setting off wild speculation that a sea monster from the deep had been discovered.

The decomposing remains of the animal measured about 13 feet (4 meters) long, and appeared on the sand of the beach at Villaricos in Andalusia, Spain, on Aug. 15. Adding to the mystery was the appearance of a body part, separate from the creature's long torso, that looked like a pair of horns.

While early speculation led some experts to believe the body might be the remains of an oarfish, that theory was soon debunked. "That is definitely a shark skeleton," Dean Grubbs, an ichthyologist at Florida State University, told NBCNews.com. "The elements toward the back were confusing me, but those are the lower caudal-fin supports. The 'horns' are the scapulocoracoids, which support the pectoral fins."