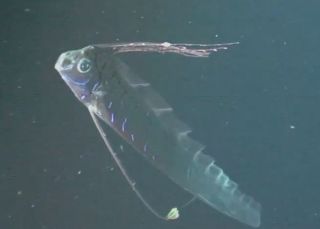 This oarfish was caught on camera by an ROV in the Gulf of Mexico in August, 2011. They can grow up to at least 26 feet long.
(Image: © Mark Benfield / Journal of Fish Biology )

Behold the oarfish, a bizarre beast the lives in the deep ocean, far offshore. Due to its remote home, little is known about the fish, whose dorsal fins delicately undulate as it glides about the deep.

Much of what we know about the creature comes from specimens that have washed ashore or floated to the surface, but in the past few years, a number of videos of the fish have been captured and are shedding more light on the animal's shadowy existence.

One video, taken by a remotely operated vehicle (ROV) in August 2011, is the longest, best-quality video captured to date, said Mark Benfield, a researcher at Louisiana State University and part of a team that made the video of the oarfish. The footage, as well as four other videos of the animal and details about what they've taught scientists, was published online June 5 in the Journal of Fish Biology.

The oarfish is thought to be the world's longest bony fish, a group that includes almost all fish except sharks and rays (whale sharks are the largest fish in the ocean). Oarfish have been reliably measured reaching up to 26 feet (8 meters) in length, but may grow to be nearly 50 feet (15 meters) long, Benfield said. The video of the oarfish shows it swimming to a depth of 364 feet (111 m) beneath the surface, undulating its long dorsal fin to precisely control its movements, Benfield told LiveScience's OurAmazingPlanet. The fish swim with their head upright and their tail hanging beneath them, and can easily move backward and forward and up and down quickly, Benfield said. [In Photos: Spooky Deep-Sea Creatures]

At the end of the encounter between the ROV and the oarfish, the creature seemed to tire of being followed and began undulating its entire body, accelerating much faster than the ROV, Benfield said. This behavior is evident in the video just before the fish disappears in the darkness of the ocean.

The video was taken while Benfield and his colleagues were working on assessing damage caused by the Deepwater Horizon oil spill, when the ROV the team was using happened to spot what appeared to be an oarfish.In the video, the oarfish appears to have a parasitic isopod (a type of crustacean) clinging to its dorsal spine, which is the first recorded instance of this happening, according to the study.

Oarfish are so-called because of the paddle-like appendages at the end of their pelvic spines, which are used to help them balance and swim upright, Benfield said.

Shortly before the 2011 Tohoku earthquake and tsunami, about 20 oarfish stranded themselves on Japanese beaches, suggesting the fish could possibly have known that the temblor was coming, Benfield said. Scientists don't understand how that might be possible, however, and it could just be a coincidence, he added.