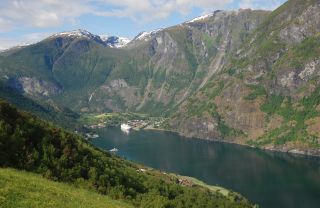 On a calm winter's day in Norway two years ago, the sea suddenly started to boil and rise, sending freak waves rolling onto nearby shores and mystifying residents. Turns out, the massive magnitude-9.0 earthquake that shook Japan in 2011 also triggered these surprise seiche waves, a new study shows.

Seiche (pronounced saysh) waves are standing waves that form in closed or semi-enclosed water basins, such as Norway's narrow, steep-walled fjords. Smaller examples of standing waves include water sloshing in a bathtub from a wriggly child, or in a swimming pool after an earthquake.

The roiling seas surprised and shocked Norwegians when the waves rolled in after 7 a.m. local time on March 11, said lead study author Stein Bondevik, a geologist at Sogn og Fjordane University College in Sogndal, Norway. The waves measured nearly 5 feet (1.5 meters) from trough to crest (their lowest to highest point). No damage was reported, however. "Luckily, they happened at low tide," Bondevik said.

A tsunami expert, Bondevik was called on by local media to explain the source of the surge. Bondevik said he first thought an underwater landslide generated the waves. "They looked like tsunamis," he said. But as the day wore on, more reports of coastal flooding came in from faraway fjords, blowing a hole in his landslide theory.

"Later in the evening I realized there must be a connection with the big earthquake in Japan," Bondevik told LiveScience. "I was so excited I couldn't sleep that night thinking about it." [7 Craziest Ways Japan's Earthquake Affected Earth]

Seiches from earthquakes are a common phenomenon — California's swimming pools go berserk after the state's big quakes — but they are rare in Norway. The last earthquake to set off seiches in Norway's fjords was the magnitude-8.6 Assam earthquake in Tibet. The great 1755 Lisbon earthquake in Portugal also unleashed seiches in the fjords.

And not every fjord in Norway started oscillating after the Japan earthquake. Only fjords pointing northeast, toward Japan, were properly aligned, and even then only some of the fjords had the right conditions to launch a seiche, the study found.

Five towns reported seiches the morning of the Japan earthquake. The water in the fjords oscillated for almost three hours, starting about 30 minutes after the Japan earthquake, the study found. People noticed the waves only where the shores had shallow beaches, such as at river deltas, the researchers said.

The researchers built a computer model of the seiches based on surveillance and camera phone videos, which timed the ebb and flow of the oscillations.

The model revealed that S-waves, a type of seismic wave, caused the rare event. S-waves shake back and forth perpendicular to their direction of travel (like waving a rope on the ground) and can pass inside the Earth. In fjords pointed northeast, the S-waves from the Japan earthquake moved the ground back and forth by 0.4 inches (1 centimeter), Bondevik said.

"You can move a lot of water just by pushing one centimeter of ground," Bondevik said.

Earlier studies have suggested seiche waves are triggered by seismic surface waves, which travel more slowly than S-waves and can only pass through Earth's crust. These earthquake waves also contributed to Norway's seiches, but the initial sloshing was sparked by the S-waves, the researchers concluded.

"We have now, because of the film clips, been able to pick out what part of the earthquake shaking triggered the waves in the fjords," Bondevik said. "And to our surprise, it was not the largest or strongest shaking, but the S-waves. They have the correct period that matches up with the fjord's [natural frequency]," he said.

The findings were published July 3 in the journal Geophysical Research Letters.