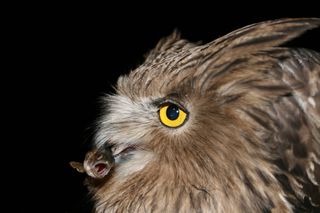 The world's largest owl requires equally huge trees, a finding that reveals that this salmon-devouring predator could be a key sign of the health of some of the last great forests of Russia's Far East, researchers say.

Blakiston's fish owl (Bubo blakistoni) is one of the rarest owls in the world, an endangered bird restricted to Russia, China, Japan and possibly North Korea. This owl is also the largest on Earth.

The dead of winter

Little was known about how this owl used its habitat, because it lives in a region sparsely populated by people with poor road access. To learn more, scientists analyzed how this owl foraged and nested in Primorye, Russia, over a forested, mountainous range more than 7,800 square miles (20,200 square km). [Images: One-of-a-Kind Places on Earth]

"The actual fieldwork only took a year to complete, but the hard part was finding the nest sites and the foraging sites to include in the study — that part took years," Slaght said. "One of the reasons it's so hard to find fish owl nest trees is that the birds are almost unbelievably shy. If they can hear you coming —and because they're owls, they probably do — they will flush at distances of about 300 feet [100 m] or more. That means it is very difficult to find nest trees or foraging sites, because you almost never see the owls at those locations."

The rivers there often have warm springs that help maintain open water in winter, which helps the owls to hunt their prey.

"The one thing working in our favor to find where the owls fish in winter is snow," Slaght said. "Fish owls will walk up and down the riverbank in their favorite fishing spots, jumping in to catch fish here and there, and so even though we might not see the owls themselves, they leave their tracks behind in the snow, so we know where they like to hunt."

Unfortunately, Slaght added, the best time to survey for these owls is the dead of winter, when temperatures can dip to the minus mid-20s Fahrenheit (minus mid-30s Celsius).

"We are often walking along frozen rivers during the day, inching up fairly close to the lip of open water patches to look for owl tracks. Everyone on the field team has fallen through the ice at least once. The rivers are not usually very deep, but it's always an unpleasant experience."

At night, the team settles into a concealed tent near a foraging spot to monitor the owls' hunting behaviors.

"It's a constant struggle to keep our remote infrared cameras running in that cold, and power cables snap like twigs. But there's something indescribably joyous about sitting quietly in a tent, wrapped up in every piece of clothing I own, sipping tea from a Thermos and watching a fish owl hunt not more than 100 feet [30 m] away, completely unaware of my presence."

The scientists discovered both the owls and their favorite prey, salmon, rely on giant old-growth trees for breeding and feeding. The large trees provide nesting cavities big enough for the birds, and when these dead, massive trees fall into nearby streams, they disrupt the water, forcing it to flow around, over and under them, generating a combination of deep, slow-moving backwaters and shallow, fast-moving channels that are critical to salmon at different stages in their lives.

"Blakiston's fish owl is a clear indicator of the health of the forests, rivers and salmon populations," Slaght said.

In recent decades, logging and other human activities have expanded into and endangered this owl's habitat. The new findings suggest conserving and managing old-growth forests is essential for sustaining this species, as well as eight salmon and trout species that spawn in the rivers there, some of the 12 other owl species found in Primorye, and mammals such as the endangered Siberian tiger, Asiatic black bear and wild boar.

"Large woody debris results in river complexity, which brings in the salmon, which brings in the fish owls," Slaght said. "This is an important realization because some policymakers don't care about conservation, but they do care about the economy. We can now make a case for reduced logging in riparian [riverbank] zones in Primorye, because this action can potentially impact commercially valuable salmon populations."

Slaght and his colleagues R. J. Gutiérrez and Sergei Surmach will detail their findings in the October issue of the journal Oryx.