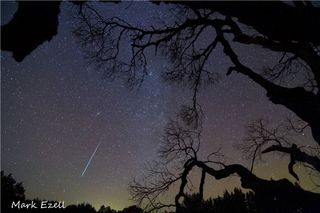 When the Perseid meteor shower bursts across the sky this weekend, with the peak coming on Monday, will people be able to hear it?

For centuries, people have reported hearing a sound made by meteors as they streaked across the skies overhead. And with the Perseids about to dazzle skywatchers with a meteor display that will earn it the title "fireball champion," some researchers are wondering if the Perseid meteor shower will be heard as well as seen.

In A.D. 817, as a meteor shower passed over China, many observers reported hearing buzzing, sizzling or hissing sounds, according to a 1992 report by Colin Keay, a physicist at the University of Newcastle in Australia. [When Space Attacks: The 6 Craziest Meteor Impacts]

A similar phenomenon occurred in 1719, when a fireball passed over England. Astronomer Edmond Halley reported, "Of several accidents that were reported to have attended its passage, many were the effect of pure fantasy, such as the hearing it hiss as it went along, as if it had been near at hand."

Halley (who also calculated the orbit of the eponymous Halley's Comet) was among the first to note that, if a distant meteor makes a sound, that sound should arrive after the meteor had passed, not simultaneously, since sound travels much more slowly than the speed of light.

As recently as the 1970s, people who reported hearing a sound as a meteor passed were routinely dismissed as crackpots, according to the report by Keay, published in the journal Asteroids, Comets, Meteors.

But after a large meteor passed over New South Wales in 1978, hundreds of anecdotal reports from people who claim they heard the meteor flooded the news media. Keay analyzed 36 of these reports and drew some important conclusions.

Meteors obviously release electromagnetic radiation in the visible portion of the spectrum, but the fact that they also release very low frequency (VLF) radio waves, below 30 kilohertz, is less known and less studied.

Because these VLF radio waves travel at the speed of light (not at the speed of sound), they arrive at the same time observers see a meteor passing overhead. But in order to be heard by hundreds of people, Keay deduced, radio waves need a "transducer," or some physical object that could create a sound.

Under laboratory conditions, Keay was able to do just that: He created rustling sounds in ordinary objects by exposing them to VLF radiation. Aluminum foil, plant foliage such as pine needles, thin wires — even dry, frizzy hair — produced sounds that were easily heard. This phenomenon is known as electrophonics.

Wire-framed eyeglasses seem to be particularly sensitive to VLF radiation: "When I was out [viewing the Leonid meteor showers in 1999], I had my head back on the ground and heard a sizzling sound," one observer reported. "My head was close to grass and leaves and I wear wire-frame glasses as well. The sound was definitely simultaneous with the observation of a rather large streak."

Additionally, they discovered that there were many meteors that were not visible to observers — they were detected only by the VLF radiation they emitted. Finding meteors solely by their VLF signatures "detected nearly 50 times more meteors than the optical method," Price and Blum wrote.

"What makes this exciting is that we're talking about a phenomenon that has been experienced by people for perhaps thousands of years," said Dennis Gallagher, a space physicist at the NASA Marshall Space Flight Center in Huntsville, Ala.

"Even in modern times folks who reported hearing such sounds were ridiculed. It was only about 25 years ago that Keay was able to do the research and legitimize the experiences of all those generations of people," Gallagher said.

"It shows there are still wonders in nature yet to be recognized and understood," Gallagher said. "We should take this experience with meteors as reason to open our minds to what may yet be learned."