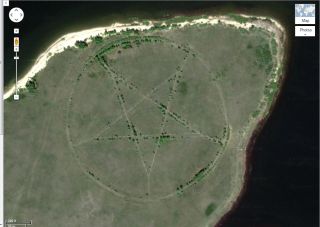 This strange pentagram, etched into the Earth's surface in a remote corner of Kazakhstan, can be seen on Google Maps.
(Image: © Google Maps)

Conspiracy theorists, start your engines: On the wind-blown steppes of central Asia, in an isolated corner of Kazakhstan, there's a large pentagram etched into the Earth's surface. And now an archaeologist has revealed the source of the mysterious structure.

The five-pointed star surrounded by a circle, located on the southern shore of the Upper Tobol Reservoir, shows up vividly on Google Maps. There are almost no other signs of human habitation in the area; the closest settlement is the city of Lisakovsk, about 12 miles (20 kilometers) to the east.

The region surrounding Lisakovsk is riddled with ancient archaeological ruins. Bronze Age settlements, cemeteries and burial grounds — many of which have yet to be explored — dot the windswept landscape. [10 Strangest Sights on Google Earth]

What is this bizarre symbol, measuring roughly 1,200 feet (366 meters) in diameter, doing on the side of a desolate lake in northern Kazakhstan? Naturally, many online comments have already linked the site with devil worship, nefarious religious sects or denizens of the underworld.

It certainly doesn't help that, upon zooming into the center of the pentagram, viewers will see two places highlighted by previous visitors to Google Maps: One spot is called Adam, the other, Lucifer — a name often linked to Satan.

The pentagram is an ancient symbol used by many (non-Satanic) cultures and religious groups. It has been adopted by the Mesopotamians, Pythagoreans (followers of Pythagoras, the ancient Greek mathematician), Christians, Freemasons and Wiccans.

The Kazakh pentagram certainly isn't the first odd discovery gleaned from Google Maps. Etched onto the desert floor of New Mexico are two large diamonds surrounded by a pair of overlapping circles. This is reportedly the site of a hidden bunker belonging to the Church of Scientology, according to the author of a book on the religious group.

Deep in the Gobi Desert, viewers of Google Maps can find a Yagi antenna array, a device that looks like a giant piece of cracked glass but is used for atmospheric research. And in a remote corner of Nevada, there's an enormous KFC advertisement, featuring the smiling face of Colonel Sanders.

Though it's difficult to discern from an aerial photograph exactly what the Kazakh pentagram is, Emma Usmanova, an archaeologist with years of experience working in the Lisakovsk area, has an answer.

"It is the outline of a park made in the form of a star," Usmanova told LiveScience. The star was a popular symbol during the Soviet era (Kazakhstan was a part of the former Soviet Union until its dissolution in 1991). Stars were often used throughout the Soviet Union to decorate building facades, flags and monuments. (Indeed, several online comments had suggested the site is an abandoned Soviet-era campground.)

The star in the lakeside park is marked by roadways that are now lined with trees, Usmanova explained, which make the star shape even more distinct in aerial photos. Additional images of the site, now abandoned and overgrown with weeds, can be seen at englishrussia.com.