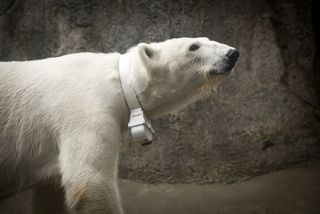 A polar bear named Tasul at the Oregon Zoo has been wearing a collar cam that shows what the world looks like through the Arctic animal's eyes. Eventually, researchers will use data collected from Tasul's everyday movements to study the behavior of polar bears in their increasingly threatened and hard-to-reach habitats in the wild.

As part of a research project for the U.S. Geological Survey (USGS), the captive female bear's collar is also equipped with an accelerometer, a device similar to the one that lets a smartphone know when it's being flipped sideways or upside-down.

In Tasul's case, the accelerometer can detect the bear's different behaviors, like walking, eating, sleeping and swimming, and each activity has a distinct digital signature. A small GoPro camera in the collar records video footage so that researchers can match each of the bear's different behaviors with their corresponding digital fingerprint. [See the polar bear cam video.]

Once the USGS researchers have decoded these electronic signatures, they hope to put similar collars on free-roaming polar bears in the wild to monitor the species' behavior without having to observe them directly, which can be difficult and dangerous work.

"Our research shows that polar bears are being displaced from sea ice habitats they formerly used," Anthony Pagano, a wildlife biologist with the USGS Alaska Science Center, who is leading the study. "This collaborative project with the Oregon Zoo will help us understand the implications between going to land or staying with the ice as it retreats hundreds of kilometers north into the Arctic Basin."

Polar bears are threatened as Arctic sea ice retreats, as they use the annual appearance of the ice to reach their hunting grounds out at sea. The dearth of ice is forcing the bears to swim more often and for longer, studies have shown; while polar bears are excellent swimmer, the long swims can drain the animals and cause some to drown. Scientists are hoping to get a better picture of just how Arctic warming is affecting the iconic animal, which is listed as threatened under the Endangered Species Act.

Tasul's keepers got the bear used to different types of neckwear before putting on the real collar, which has allowed keepers to get a bear's-eye view through the video footage. Amy Cutting, Oregon Zoo curator, called Tasul the "perfect candidate" for the study.

"She doesn’t mind wearing the collar and actively cooperates," Cutting said in a statement. "There's a lot we need to learn about how climate change is affecting polar bears, so it's very rewarding to see Tasul offering researchers a chance to study this threatened species in a new way."